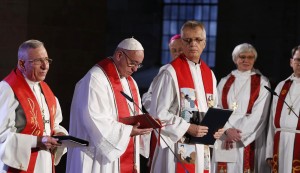 Pope Francis with some Lutherans

What is distinctive about Lutheran theology, may we ask, that is something Catholics need to learn? I am not an expert in Lutheranism, but I can’t recall any contribution that Luther made to our already existing theology. To be sure, the Catholic Church at that time was too often overweight with corruption, malfeasance and worldliness among some of its members. It is true that many Catholics perceived their religion as a religion of works and the vital aspect of faith was too often neglected.

But this was nothing new. The Church had corrected the error of salvation by works in the Pelagian controversy centuries before. We did not need a new doctrine. We needed a re-affirmation of the old. The Church did not need Reform. It needed renewal.

It is worthwhile comparing Martin Luther to St Francis. Luther brought about revolution. Francis brought reform. Through prayer, sacrifice and submission Francis turned the mighty ark of the church. Along with Dominic, and through the work of the Holy Spirit the friars brought the necessary renewal to the church.

What was the true legacy of Lutheranism? Besides the monstrous scandal of schism in Christ’s church, Lutheranism fed the flames of nationalism and war. Be reminded of  The Thirty Years war.

The Thirty Years’ War was a series of wars in Central Europe between 1618 and 1648. It was one of the longest and most destructive conflicts in European history,[15] as well as the deadliest Europeanreligious war, resulting in eight million casualties.

Initially a war between various Protestant and Catholic states in the fragmented Holy Roman Empire, it gradually developed into a more general conflict involving most of the great powers. These states employed relatively large mercenary armies, and the war became less about religion and more of a continuation of the France–Habsburg rivalry for European political pre-eminence. In the 17th century, religious beliefs and practices were a much larger influence on an average European than they are today. During that era, almost everyone was vested on one side of the dispute or another, which was also closely tied to people’s ethnicities and loyalties, as religious beliefs affected ideas of the legitimacy of the political status of rulers.

Most importantly, the Protestant revolution established a precedent in Europe. The precedent was that revolution was a way to accomplish one’s religious and political aims. Furthermore, before Luther’s revolt the nation states of Europe were united in loyalty to an overarching moral authority–the authority of their shared Catholic religion. Luther shattered that. Instead nation states developed and the rivalry of national powers ushered in not just the Thirty Years War, but established the national rivalries that would plunge Europe into war after war after war–culminating in the First and Second World Wars.

Of course I am not blaming the bloodshed in Europe only on Martin Luther, but the Protestant Revolution was a key contributing factor in what transpired.

Shall we turn to England? What was the legacy of Henry VIII’s revolution? An entire social order was overturned. Monasteries and parish churches were stripped of their property. Monks and nuns were murdered in the streets. The King (and later his murderous daughter Elizabeth) consolidated their power and wealth by demolishing an established order. When the monasteries were closed the funding for the many poor houses, hospitals, orphanages and old peoples home dried up and the poor were thrown into the street.

Of course I realize my reading of history is biased, but so is the opposite reading of history which would make us believe that the Protestant Revolution was no more than a gentle working of the Holy Spirit to prune back his church and bring spiritual renewal and reform to his people. That is just as much a biased and blind reading of the events as mine may be.

Therefore, in an effort to be fair let me try to think what we might be celebrating about the Protestant Revolution. Continue Reading