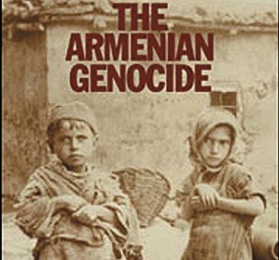 As the wolves of ISIS have captured whole villages of Christians we should remember the horrors of the Armenian genocide which took place in the same part of the world with the same culprits.

ZENIT reports on the work of German historian Michael Hesemann who has discovered a cache of documents concerning the Armenian genocide which took place a hundred years ago this April.

The genocide was carried out during and after World War I and implemented in two phases: the wholesale killing of the able-bodied male population through massacre and subjection of army conscripts to forced labour, followed by the deportation of women, children, the elderly and infirm on death marches leading to the Syrian desert. Driven forward by military escorts, the deportees were deprived of food and water and subjected to periodic robbery, rape, and massacre.[10][11][12] Other indigenous and Christian ethnic groups such as the Assyrians and the Ottoman Greeks were similarly targetedfor extermination by the Ottoman government, and their treatment is considered by many historians to be part of the same genocidal policy. (from Wikipedia)

In this article  Hesemann reports on the links between the Armenian genocide and the Nazi extermination of Poles and Jews. Germany was a close ally of Turkey and when Hitler planned his invasion of Poland and subsequent slaughter of Poles and genocide of Jews he was heard to say, “Who remembers the Armenians?”

The fact that the Turkish government still denies the holocaust is shocking. Houseman says,

if you read a book by the department of Tourism of the Republic of Turkey “2,000 years of Turkish history”– a strange title since Turkey has more than 5000 years of documented history – you read the following quote: “The Ottoman government decided to immigrate the Armenians who were involved in the uprising to a safer place, namely Syria and Lebanon … The immigration process was carried out in a successful way as most of the Armenians were safely transferred to Syria”, you can only call this a cynical lie!

There is a chilling echo in the region today. The Armenians were driven from Turkey on death marches into the Syrian desert. The Ottoman government warned citizens of Mosul not to drink water from the river because it was contaminated by the thousands of Armenian corpses.

Today Mosul is occupied by ISIS–who are repeating the crimes done a hundred years ago and would, not doubt slaughter as many Christians as possible if they could find them.

For the most part the world has remained ignorant and silent about the Armenian holocaust.

As we come to the centenary of the world’s worst persecution of Christians we need to remember what happened and point out that it is about to happen again.