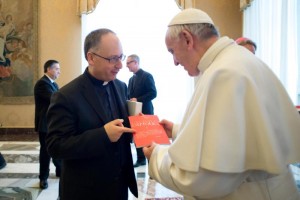 The article that everybody is talking about at La Civiltà Cattolica can be read here.

Fr de Souza has analyzed it brilliantly over at CRUX. His juicy observation about the article is that “It does not rise to the level of mediocrity”

Having read the article I actually agreed with some of the observations about Evangelical Fundamentalism.

The problem is that the authors are commenting on something they don’t know about from personal experience. It’s all theory from a few books they’ve read and perhaps a few conversations with fellow intellectuals in some coffee shop in Europe.

The American Evangelical scene is far more complex and crazy than these guys understand. Their snide comment, for instance about Evangelical fundamentalists being mostly “white men from the deep South” is a racist bigoted comment on the level of Obama’s famous and fatuous wisecrack about country folk who “cling to their religion and guns” or Mrs Clinton’s “basket of deplorables”.

When will these people learn that not all conservatives are Wal-Mart shoppers with a gun rack in their pick up?

But the main problem is that in the second half Spadaro and Figuerao attempt to throw Catholic conservatives into the same pick up truck as the “stupid Evangelicals”. They come up with a name “Catholic Integralists”. This shadowy group want to create a “theocracy” and go to war with the Muslims etc. etc. As others have pointed out, such American Catholics only exist in the imagination of Spadaro and Figueroa. They come up with Michael Voris and his Church Militant group. Sure, but Michael and his devotees are a tiny minority in the Catholic Church of the USA. Do we really need the editor of a major Vatican paper to put Voris in his place? I think not.

Spadaro’s attack on American “Catholic Integralists” is an attack on a straw man. Its a scarecrow and like all scarecrows the article doesn’t have a brain.

But there is a reason for Spadaro to create this straw man. He wants to create a scarecrow that is scary. By creating this imaginary creature “the American Catholic Integralist” he has given a label to all the Catholic conservatives he wishes to demonize.

This follows the usual routine of conflict: 1. Generalize about your enemy. 2. Imagine they are organized 3.Create a name for this shadowy group  4. Demonize them 5. Marginalize them 6. Exclude them 7.Get rid of them. 8. Feel good about it.

In other words, use a scarecrow to create a scapegoat.

The article is a classic example of the progressive passive-aggressive tactics. The talk is all about sweetness and light and tolerance and being nice, but while they smile they stab and while they kiss they twist the knife.

The fact that Spadaro and Figueroa blather on about “Pope Francis is building a world without fences and borders–which calls for dialogue and not for war and conflict”makes this blatant attempt at stereotyping and scapegoating all the more ironic.