St George and the Dragon

St George and the Dragon 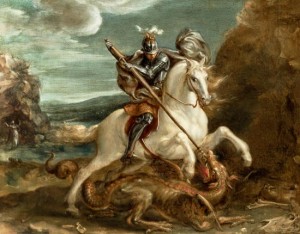 My article for Imaginative Conservative website this week is a review of Dr Taylor Marshall’s excellent novel,Sword and Serpent

Taylor takes us to fourth century Rome to tell the story of St George and the Dragon. He’s done a great job weaving together legend, myth, history and a traditional hero’s quest story.

His accomplishment in Sword and Serpent is a remarkable blend of historical fiction, fantasy, and myth. Using the fact that the story of St. George is rooted in history, but surrounded by mythical elements, Dr. Marshall avoids the temptation to de-mythologize and, through the use of imagination and fantasy, decides to re-mythologize. He does so skillfully, never quite revealing whether the dragon is a literal reptile, a paranormal manifestation of evil, or a beast from the realm of the daemonic. It doesn’t matter. A dragon is a dragon is a dragon, and Georgios is led by providence to enter the cave, encounter the serpent, and slay him once and for all. That the beautiful Sabra stands by in a white bridal gown says all that needs to be said about Dr. Freud’s interpretation of the myth.

Dr. Marshall also manages to capture the intriguing religious atmosphere of the Roman Empire in the fourth century. The story opens with the lament that the ancient gods have died. The haruspex can no longer discern the future in the entrails of the victims. The sybils are silent, and the pagan prophets are blind. Christianity is on the rise, and George’s slaughter of the ancient dragon is a powerful victory over the old gods and their demonic domination of the world. The book evokes the tender and wise world of the early Christians—avoiding persecution with gentleness and taking hold of the future with confidence.

I receive so many books for review–probably two or three a week–and I only have time to pick up and read a few. If they don’t hold my attention I abandon them. Taylor Marshall’s bot me going right to the end.