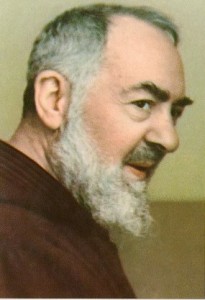 Today is the memorial of the Stigmata of St Francis.

Stigmata are one of those unusual phenomena within the Catholic religion which remind us of that the body, mind and spirit are completely interlinked.

The word stigmata comes from the Greek word stigma or “mark” and this word is used in Galatians when St Paul says he bears in his body the “marks of the Lord”. Scholars are unsure if this means St Paul was actually a stigmatic or whether he is talking symbolically about the tattoo or mark a slave would have on his body to indicate that he was a slave and who his owner was. The “stigma” of the Lord would thus refer to the sign of the cross given in baptism–the mark or sign that one belongs to Christ Jesus.

The stigmata take various forms. Many stigmatics show some or all of Christ’s five wounds. Some also bear wounds on the head as from the crown of thorns. Some also have wounds on their backs as from scourging. The stigmatics sometimes have recurring bleeding and some have “invisible wounds” intense pain, but not outward marks. A good number of stigmatics also suffer from inedia–living with minimal food and water (except for the Eucharist) for extended periods of time.

Some modern research has indicated stigmata are the result of disturbed emotional state and may be brought on by the disturbed individual himself. The interface between mental and emotional trauma and illness and the stigmata is mysterious. Did the emotional illness cause the stigmata or was the stress, trauma and suffering part of the stigmata phenomenon?

In his Stigmata: A Medieval Phenomenon in a Modern Age, Edward Harrison suggests that there is no single mechanism whereby the marks of stigmata were produced. Harrison found no evidence from a study of contemporary cases that the marks were supernatural in origin. He concluded, however, that marks of natural origin need not be hoaxes. Some stigmatics marked themselves in attempt to suffer with Christ as a form of piety. Others marked themselves accidentally and their marks were noted as stigmata by witnesses.

Marthe Robin and Theresa Neumann along with Padre Pio are the most famous and unusual documented cases of stigmatics in the modern age.