Stripping the Altars is Ripping the Heart Out of Catholicism

Stripping the Altars is Ripping the Heart Out of Catholicism 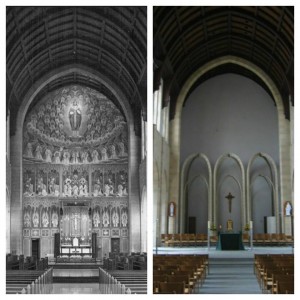 This before and after photograph of the St Turibius chapel of the Pontifical Josephinum seminary illustrates what was done to Catholic architecture across the world in the wake of the Vatican 2 revolution.

A vital break in the sacred tradition took place which is rightly called a new stripping of the altars.

As I travel around the country and see archive photographs of our Catholic churches it is clear that it happened virtually everywhere. Marble altarpieces were ripped out, statues taken down and relegated to basements, votive candle racks removed, beautiful flooring covered with carpet, wall paintings white washed and tabernacles moved to the side….the list goes on and on, and when the liturgical experimentation was finished, the religious orders invaded by pop psychiatrists, the colleges and universities taken over by modernism  and the sacred music transformed into mediocre folk and light rock groups the new Protestant revolution was complete.

I always try to be broad minded and fair, but when you see the brutal, cheap and ostentatious churches that were built the crime of erecting these warehouses with tacky Catholic stuff inside is only surmounted by the iconoclastic crimes perpetrated on the existing buildings and artwork.

I do not know the details of the Josephinum wreck-ovation, but if the place was in need of work was it impossible to restore the artwork, modernize the facilities and do so with taste, balance and a sense of continuity? It seems not, and this process was repeated time and again by naive and ignorant modernist ideologues.

What has been the result? Has the experimentation filled the seminaries, sparked a wave of new vocations to the religious life, filled the churches with new life and brought Catholicism alive for the modern age?

I think we all know the answer.

The church is in crisis and the fact that some of the perpetrators of this well meaning exercise in brutal iconoclasm are now approaching the highest level of the hierarchy is discouraging indeed, for be assured what they have done to the architecture is symbolic of what they are doing to the church and her teachings. Just as the altars were stripped the sacrifice of the Mass which was offered on those altars was watered down to be a fellowship meal. Just as the images of saints and angels were removed so veneration of the saints and angels was scrapped. Just as the reverence and solemnity was replaced by banal music and servers in sneakers so the belief in what was held sacred was denigrated and thrown out. 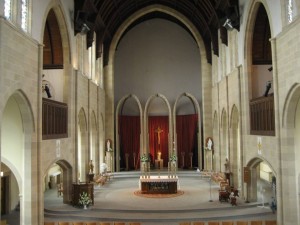 Nevertheless, all is not lost. One of the best things about the cheap renovations is that the shoddy  workmanship and cheap materials are showing their age. The carpet is wearing out. The polyester vestments have worn badly. The cheap sacred vessels have lost their thin plate. The cheap nasty buildings are leaky and not worth repairing.

A new renovation is taking place as a more educated generation of clergy are coming in and restoring again what was lost. They are not simply putting the old stuff back, they are replacing and re-building in a new way sympathetic to the true meaning of the Second Vatican Council while being consistent with the tradition. The picture of the Josephinum chapel as it now stands shows great improvement–showing that something can often be salvaged from the wreckage.

New church building is also being done within the tradition. This article at Crisis unfolds the new churches being built in the American south in a traditional style.

These are new temples for the King of Kings–not preaching houses for Protestantized Catholics.

I’m proud to say that our own parish of Our Lady of the Rosary in Greenville, South Carolina is helping to restore the “sacred” to sacred architecture. 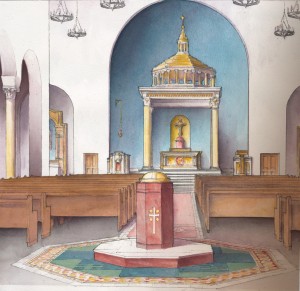 Interior new Our Lady of the Rosary Church in Greenville, SC

Our small parish of just 550 families has worked hard to raise the money for a new church.

Pictured left, it will be built in a traditional Romanesque style, with a set of 42 splendid stained glass windows salvaged from a church in Massachusetts, the new Our Lady of the Rosary is inspired by the Romanesque simplicity which makes it appropriate for our modern age, yet still in continuity with the past.

We are now entering our final stages of fund raising.

If you agree with me that the brutalism of the past should be in the past, will you help us to build this answer to the problem?

You can make an instant donation by going here to the parish website.

If you would like more information about large donations and naming opportunities please send me an email to discuss: dlongenecker1@gmail.com

You may also write to me if you would like information about the columbarium that will be included in the lower level of the church. This place to repose ashes will be located within the shrine to  the Divine Mercy in the lower church.

Thank you for your financial help. You can also help by praying for the success of this project and by telling others about it by forwarding this post. 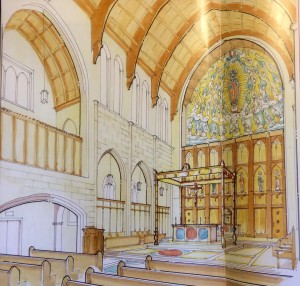 UPDATE:  Sources close to the Pontifical Josephinum Seminary inform me that the improvement pictured above is not the final word. A capital campaign is underway (or soon to begin) which includes plans to renew the chapel in a way that is continuous with the past, while still considering modern worship requirements.

It is important to remember that modern church building is not simply an attempt to turn back the clock or create copies of old buildings for their own sake.

Benedict XVI’s “hermeneutic of continuity” means that the past is brought into the present and revitalized in every succeeding generation. Whenever there is cultural iconoclasm the proposed changes are a lie and will fail. The conservative principle acknowledges that constant change and renewal is necessary, but the old is renovated, restored, updated and refreshed instead of being destroyed wholesale and replaced with something else.

Here is an artist’s rendering of the proposed restoration of the St Turibius Chapel at the Josephinum.