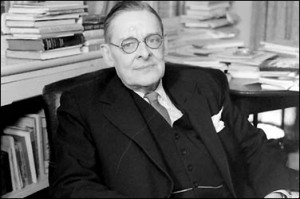 My essay for The Imaginative Conservative this week considers Eliot’s poem Ash Wednesday and looks at his penitential life.

Ash Wednesday was composed at the climax of Eliot’s disastrous relationship with Vivienne, and it clearly indicates that with his religious conversion he had also decided to embark on a new life which would be free of Vivienne. Ash Wednesday echoes with much of the same imagery that would recur in The Four Quartetswritten a few years later. As he drew us into the emotions of despair and horror in The Waste Land, so the poet uses mysterious imagery, complex allusions, and abstract symbolism to share in the emotions of exhausted regret and sorrowful penitence. There runs through the poem a sense of sadness mingled with the whisper of a wish for a breath of new life. The lines echo with a new-found innocence combined with the wisdom of experience. There is an air of resignation and fragile hope that “these dry bones” might “atone to forgetfulness” and once more learn to sing. Out of the twisted wreckage of his marriage, Eliot speaks poignantly of “the mother, the sister and the woman in the white gown” and cries out time and again for the need to “redeem the time.”

Turning from worldly ambition and the cynical use of his gifts for fame, Eliot is ready to turn his poetic genius to the service of beauty and truth. He will become the solitary penitent, praying that, before it is too late, God might teach him “to “care and not to care, teach him to sit still.”

Eliot lived with Vivienne for seventeen years, and for the next fifteen the threat and memory of her was constantly present. First she stalked him as a grim reminder of his tragic mistake, and then he must have borne visions of her incarcerated and trying to escape from the insane asylum. His friends reported that he was wracked with guilt at his necessary abandonment of her, and was tortured further by her ultimate lonely death.