The Tale of Two Catholic Churches

The Tale of Two Catholic Churches 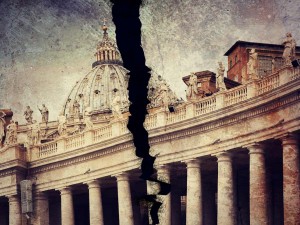 I will be re-posting various article from the past that I have written for various outlets. This article was first published by National Catholic Register in 2008.

The Tale of Two Churches

I have been a Catholic now for thirteen years. Like most converts, I described my reception into the Catholic Church as ‘coming home.’ However, the homecoming was not all that the sentimental phrase implies. It is true that in coming home we received a warm welcome from many Catholics. It is also true, that in coming home we soon sensed that there were strangers in the family homestead. There seemed to be interlopers—aliens who had sneaked into the family home and taken it for their own.

What I was not prepared for was to find two Churches within Holy Mother Church. These two churches are very difficult to identify and define because the two different groups cannot be separated according to outward criteria alone. It is too easy to divide these two groups according to ‘liberal’ or ‘conservative’; ‘charismatic’ or ‘traditionalist’; ‘right wing’ or ‘left wing’. The two groups I am talking about exist within all these preferences. The two groups are distinguished not so much by what they do, the way they worship or the causes they espouse, but by their underlying understanding of just what the Catholic Church is for.

Built Upon a Rock?

We receive our foundational assumptions from those who first educated us. These underlying assumptions, like the foundations of a building are invisible, yet they support everything else. Two very different sets of underlying foundations have created the two churches within the church. The two opposing views can be called ‘Happy Here’ and ‘Happy Hereafter.’ Those who hold the first believe that the point, not only of the church, but of the whole of human existence is to produce human happiness here in this life. The second is concerned with finding eternal happiness.

According to this basic assumption, this life is a vale of tears. This mortal life is hard because it is a place to battle against sin and to produce those diamond-hard souls called saints. Those who hold to the ‘happiness hereafter’ viewpoint expect to sacrifice their happiness here to win happiness hereafter. If this is your basic assumption, then your expectations for this life are realistic. You consider yourself and other people, while created in God’s good image, to also be sinners who need redemption and daily discipline. You believe in the reality of evil and consider this life to be the place and time to engage in spiritual warfare for the winning of souls.

This underlying assumption used to be the foundation belief not only of Catholics, but of all who called themselves Christian. All Christians understood life here and hereafter in this way. To do so was simply what Christianity was all about. Unfortunately, this basic assumption has been eroded within every branch of the Christian community. Modern Christians seem to have adopted one of America’s founding principles as the founding principle for the whole of life and the whole of their understanding of the Christian faith. The American ideal of ‘life, liberty and the pursuit of happiness’ may be a noble political ideal, but once the ‘pursuit of happiness’ becomes the basic foundation for one’s whole worldview a terrible distortion of the faith is the result. Continue Reading