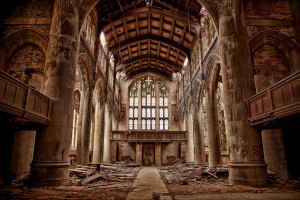 What are the factors that attract people to follow Jesus Christ in his church and what puts people off?

Here are ten ideas of things you find in a typical Catholic Church or in Catholic culture which are repellent.

1. Self Righteousness – There are few things more off putting than a self righteous know it all. When the self righteousness is religious it’s even worse. You can spot this self righteousness in both the radical conservatives and the radical progressives. They’ve turned their version of Catholicism into the only one and they’re not only right, but everybody else is wrong. Not only is everyone else wrong, but they have to be condemned, vilified, blamed and scapegoated. This is not true religion. It’s a false and twisted form of religion and no wonder people who sniff it out take off.

2. Legalism – I’m glad the Catholic Church has canon law and liturgy. I’m glad it is all written down somewhere. I’m glad we go by the book, but the “Sabbath was made for man, not man for the Sabbath.” When religion is only about rules and regulations and we forget people and the messiness of real life, then religion has defeated its own purpose. The  rules of the game are there to allow us to have fun playing the game. Of course we need someone to pay attention to the rules, but they need to remember what its all about in the first place. They need to remember that you need a map, but the map is not the journey.

3. Unfriendliness – What is it like to visit a Catholic Church for the first time? Unfortunately many people report that nobody talks to them, there is no process for welcoming new members, they are ignored and have to practically plead with people to join the Catholic Church. “Oh yeah. I think we have something called RCIA, but it doesn’t begin until September and I don’t know who is running it this year.” If we love the church we might take the time and effort to welcome others into it.

4. Poor Preaching – I hear from readers around the country that the quality of preaching in many Catholic parishes is abysmal. Priests and deacons are unprepared, their content is shallow and their convictions weak. I hear that they drone on and on stringing together cliches and anodyne religious sentiment combined with a feel good self help agenda. This is not the case of the blind leading the blind, but the bland leading the bland.  What’s the result? “Because you were lukewarm I spat you out.”

5. Modernism – People don’t want to the Catholic religion turned into a mixture of the Rotary Club and the Democratic Party. If they wanted a way to feel warm and cozy and make the world a better place they’d join the Girl Scouts. Modernism robs religion of the supernatural element. At that point it is no longer a religion. It’s a set of table manners.People are longing for an authentic connection with their Lord, their God, their Creator and their Father. Modernism gives them a mealy mouthed moral code.