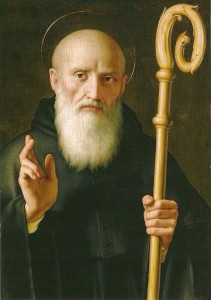 …is another name for the Benedict Option. My latest article at National Catholic Register assesses the signs of the times and wonders if it isn’t time to emulate St Benedict–who headed for the hills when faced with a society in terminal decline.

By the end of the fifth century, the Roman Empire was in ruins. Weakened from within through corruption, wealth, luxury and self-indulgence, Rome had, for the better part of the century, been invaded by aggressive foreigners.

The empire was bankrupt, both morally and fiscally, and around the year 500, Benedict — a young nobleman from Norcia — decided the best thing he could do was head for the hills and become a hermit. First, he went to Subiaco and lived in a cave, where he was mentored by an older monk. Finally, he moved south to Monte Cassino, where he established small communities where men and women could follow a simple, dignified life of work, study and prayer.

G.K. Chesterton said every age is saved by a saint that is most unlike it. So St. Benedict’s monastic simplicity was the answer to the luxurious corruption of fifth-century Rome.

He answered lechery with purity. He answered luxury with simplicity. He answered ignorance with love of learning. He answered decadence with industry and cynicism with faith. His simple hillside communities became beacons in a dark age and a refuge in the storms that were to come.

Benedict’s example is worth remembering today, as many sense the same tempests rampaging through what feels like the decline of the American empire. When we consider the end of Rome, the parallels are soberingly similar.