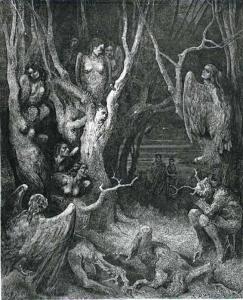 The Wood of the Suicides

In Dante’s Inferno, the violent are confined in the seventh circle.

In the second ring the suicides are imprisoned in trees. They have lost their bodily form because they destroyed their body through suicide. In other words, for whatever sad reasons, they hated themselves and their lives and their bodies so much that they thought it better to destroy it.

I am writing a poem cycle which springboards from the different images in Dante to compare it to situations in our contemporary society.

Here, for example, is my poem for the first ring in the circle of the violent- violent against your neighbor:

The guard at the clinic used to bully

the old ladies praying their rosaries.

The more they prayed the more rude and unruly

he’d become. Inside, the orderlies

while the doctors scrubbed for the next procedure.

we keep the calvarium whole.” He says.

After the dismemberment is done, he lays

the pieces out and packs the head in ice.

Suddenly I saw the scene outside of time;

tiny voices accused them of their crime.

They writhed in rage or silently stood

awash in a flood of boiling baby blood.

Some who have read my Infernal Cycle have complained that it is too dark and negative, but it is supposed to be dark and negative and terrifying just as Dante’s inferno was meant to convey the torment and terrors of hell.

So in pondering how to deal with the ring of the suicides, I did not want to condemn suicide as such, but I was led to ponder on the aspect of our society in which we hate the bodies and lives we have been given to such a degree that we destroy them.

What nobody seems to see clearly about the current transgender phenomenon is what the Doctor Frankensteins of our day are actually doing. With pills and potions we are altering the body’s chemicals to seemingly turn men into women and women into men. Then we surgically mutilate the person. We shave the man’s Adam’s apple. We implant plastic breasts. We amputate. his penis and testicles, We re-shape his face and inject fat to make it look more feminine.

We do the opposite with women. We help them grow beards, remove their breasts and fashion artificial penises for them. Some of them keep their female plumbing and conceive children and breastfeed with beards.

Like a form of living suicide, we help the person destroy the person they were created to be and to mutilate their body to become something or someone else. I then thought further about the other forms of mutilation we are supposed to think is just wonderful: plastic surgery, extreme piercings and tattoos. What is the psychology here? Isn’t this a kind of self harm based in an unhappiness with who we are and how we are made?

Of course one doesn’t want to be extreme or we would outlaw all plastic surgery, cosmetic orthodontics, make up and dyed hair. For that matter the one who wants to be completely self accepting and natural might decide to go barefoot and stop using deodorant.

Also, do not mistake my meaning. I have nothing but compassion for the person whose self esteem is so low that, for whatever reason, they hate themselves and long to be a different person. I also realize that the issue of gender dysphoria is real for a very small number of people, and that depression and suicidal feelings are a terrible burden for some.

By discussing this delicate subject in the context of a poem about hell am I condemning all people in this situation to hell? Of course not. It is a poetical way of discussing the human condition. God knows every heart and deals with every person according to his mercy.

I am commenting on an intentional self mutilation which indicates a sad state of mind and a person whose life is disordered and broken in some way. Furthermore, I realize that these problems are often not of their own making.

Do I blame them? No. I wish for all who suffer to find healing and wholeness, and as much as one can one should listen and try to understand everyone’s condition. I am not a psychiatrist, but I do confess bewilderment at the mental and emotional state that pushes a person to such radical solutions, and I wonder whether they are solutions at all, but merely an attempt to change one’s outward appearance in the hopes that one might find happiness.

This brings us back to the mentality of suicide. In working with people, most often I hear from those who are contemplating suicide that it will bring them to a better place, that it will take them out of their present misery and make them happy. In other words, suicide is seen as a quick path to happiness, and the truth is that destroying the way we were made does not bring happiness.

The path to true joy is always a much longer, and more difficult journey.