The Mysterious Case of Scalia’s Priest

The Mysterious Case of Scalia’s Priest 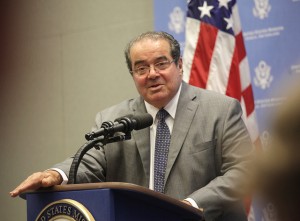 I have to confess, I am fond of conspiracy theories. I like to ponder who really killed JFK. Why was the Bush clan so close to the Hinckley family whose son tried to assassinate Reagan when Bush Sr was VP? Is Jimmy Carter really one of the Kennedy boys and is Bill Clinton really a Rockefeller? Was Queen Elizabeth I a man and are the members of the British Royal family immortal shapeshifting reptilians from outer space? Were the twin towers brought down by Cheney and his gang? Is Osama Bin Laden still alive (along with Elvis Presley) and was Princess Diana bumped off by the Duke of Edinburgh as part of an Illuminati plot?

In liking conspiracy theories I don’t suppose they are all true, but I’m intrigued by the mindset that gets absorbed by conspiracy theories. The true believers line up all the facts to fit the theory. When the facts don’t fit it is evidence that the nefarious powers have altered the news stories and tinkered with the evidence. If there is no evidence, that is evidence itself of how good the cover up really is. “Of course Queen Elizabeth appears to be a sweet old grandma who loves Corgi dogs and never reveals herself to be an alien reptilian shapeshifter! That’s exactly how you would expect a secret alien reptilian shapeshifter to disguise himself!!!! Duh!!!”

The other thing that is tantalizing about conspiracy theories is that there is always just enough evidence to set you thinking and wondering if, perhaps, the conspiracy theory is true after all.

Take the intriguing story of the Bisley Boy. The legend is that the young Princess Elizabeth–the daughter of Henry VIII and Anne Boleyn– was sent to a country village to escape the plague. She died there and the villagers–so afraid of the wrath of the king– substituted the only other child with red hair–a little boy. It was okay. The kid would probably die young or have his head cut off. That’s the way things were back then. Besides there were already two other heirs to the throne ahead of this child and the little girl was considered illegitimate anyway. No big deal. Of course, as things go, the boy not only grows up and survives, but it looks like he-she is going to be the monarch. Suddenly it is in his interests, and the interests of his supporters to keep the secret. It explains a lot about Queen Elizabeth: why she never married, why no one–not even doctors–saw her unclothed. Why she wore wigs (he was bald) and heavy white make up (to hide his beard) why she had a deep voice and liked hunting…..

…You know how it goes. The more you believe the conspiracy theory the more the facts just seem to fit…..or you make them fit and ignore the ones that don’t.

One must not let something like facts get in the way of a good conspiracy theory.

So, all of that to observe that poor old Justice Antonin Scalia was hardly cold before people began to smell a rat. The usual whispers  started to surface: “Why such a rush to remove the body? Why no autopsy? Was he discovered with a pillow over his head? Isn’t an isolated ranch exactly the right place to bump somebody off? Did you know the owner of the ranch was a Democrat donor? Why was the judge pronounced dead over the phone without the even seeing the body? Is that because the coroner knew he was going to die anyway?” Continue Reading

Standing on My Head