The Mystery and Meaning of Martyrdom

The Mystery and Meaning of Martyrdom 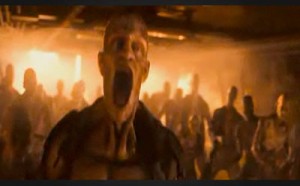 Insane Beast from “I Am Legend”

When faced with the new horrors confronting Christians in the world today one comes back time and again to ask “Why”?

First of all we consider the enemy. Within the world there is an irrational rage that surges out into violence. One cannot enter into any kind of discussion with such violent and irrational rage.

When faced with it I am reminded of the sub human beasts in the film I Am Legend. There was no reasoning with them. They were demon possessed, and demons, but definition are unable to reason. They are beyond reason because they are creatures of the lie and their Father is the Father of Lies.

This is the irrational rage which has always thrown itself, howling, vociferous and viscous at the children of Light. St Peter said it true, “Your adversary the devil is a roaring lion stalking about seeking whom he may devour.”

The Christian response has been martyrdom, and here is where the mystery lies.

The great wound in the world is that we are unhappy and we blame others for what is wrong with the world. Blaming others means that if we want to put the world right we must get rid of the ones who are the problem. The logic continues to force us to not only blame others, but to try to get rid of them, and the more frustrated we are in not being able to get rid of them (because maybe they are bigger and richer and stronger than us) the more we drift into irrational rage and murderous violence.