The Oldest Hymn to Mary

The Oldest Hymn to Mary 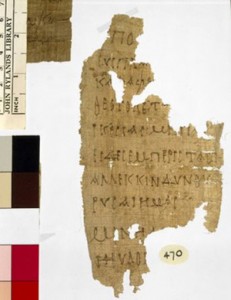 One of the things that maddens and amuses me about Protestants is something called “primitivism”. I’ve written about it here. “Primitivism” is the ambition to return the church to the simplest form as it was in the “early church”.

The little fundamentalist church in which I grew up worked on this assumption. They were going back to basics and getting rid of all those “man made traditions”. They were cutting out the denominations and prayers read out of books and all that fancy stuff and it would be just the Bible.

Their idea of the “early church” was, of course, what their church was like. They were actually ignorant of the facts about the early church, which is understandable as they were Bible  only Christians. Consequently they assumed that the early church was just a group of Christians meeting in someone’s home or a simple building to sing songs and have a Bible study.

One of the things they definitely did NOT have was any devotion to the Mother of God. That was a late, Catholic, man made abomination!

That was a much later pagan interpolation into the simple Bible based religion!

This blog post outlines the fascinating discovery of the manuscript of the oldest hymn to the Blessed Virgin.

The earliest text of this hymn was found in a Christmas liturgy of the third century. It is written in Greek and dates to approximately 250 A.D.

In 1917, the John Rylands Library in Manchester acquired a large panel of Egyptian papyrus including the 18 cm by 9.4 cm fragment shown at left, containing the text of this prayer in Greek.

C.H. Roberts published this document in 1938. His colleague E. Lobel, with whom he collaborated in editing the Oxyrhynchus papyri, basing his arguments on paleographic analysis, argued that the text could not possibly be older than the third century, and most probably was written between 250 and 300. This hymn thus precedes the “Hail Mary” in Christian prayer by several centuries.

Here it is set to music.

Turns out the hymn to the Theotokos (the God Bearer) dates from 250 AD.