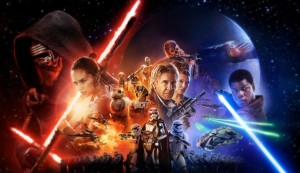 It was pretty much a re-make of A New Hope  but it was fun and I enjoyed it. It was certainly better than the plastic and shallow prequels.

It was great to see Han and Leia back in the story and I loved seeing Luke as a monk at Skellig Michael.

I do have a grumble however. (WARNING: little bit of a spoiler coming up)

Why do film makers feel like they have to preach a sermon?

The sermon in this case was the pretty obvious and heavy handed left wing diversity sermon.

The heroes were women and minorities. The villains were all white guys.

Am I being too thin skinned here?  Did they really have to portray Han Solo as an emotionally comatose deadbeat dad?

So the emotional climax of the movie is the bad guy actually killing the old white guy father figure?

As an old white guy father figure you’ll forgive me for being a tiny bit offended.

Maybe I’m taking it too seriously, but all the genocidal storm troopers were white. The chief villain was white, the leader of the First Order armies was a white Nazi type figure, and the “Supreme Leader” leader Snoke, sitting on his throne was like an evil version of God the Father.

Anyway. It was fun and hey, it’s only a movie.

But on the other hand, it promises to be a very influential movie. Movies are where ideas are formed and imaginations are sparked. So when the theme of the movies are ideologically driven (as this one clearly was) the movie fails.

Don’t get me wrong. I object to the feminist, revisionist subtext of the movie, but I object more to the fact that the movie was used as a preaching opportunity. In other words I don’t even object to the content of the sermon as much as I object to there being a sermon at all.

The strength of the first three movies is that they functioned on a deeper level than just a sermon. They functioned on a mythopoeic level. In other words, they resonated deeply in the human heart at the level that myth does. This is why they were great films and why the prequels (with their political posturing) and this film–to a lesser degree–with it’s politically correct sermonizing–ultimately fails to come up to the mythic level of the first films.

What do I mean by the “mythic level”? I mean certain stories connect with archetypes that resonate universally in the human imagination down through history and in every culture at every place. The orphaned hero goes on the great quest. There is the magical sword, the monastic mentor, the hidden treasure, the book of wisdom, the arch villain, the descent into the cave…and so forth.

To be sure these elements were woven into The Force Awakens  but they were done in a formulaic way.

Despite my grumbles the new Star Wars movie is a winner and I look forward to seeing how they’ll take the story further.