The Problem With Protestantism

The Problem With Protestantism 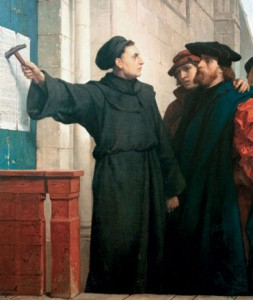 One of the complaints of Protestant converts to the Catholic religion from is that they miss the “fellowship” they enjoyed in their previous church community. By “fellowship” they mean the warm friendship, camaraderie, sense of shared faith and personal commitment. When they come to the local Catholic church they are likely to find not only that it is five times larger than their Protestant church, but the members are from a wider range of socio-economic, ethnic and racial backgrounds.

My parish in South Carolina is a small one by Catholic standards, but we have three Masses every weekend and welcome between eight hundred and a thousand worshippers. A French executive from Michelin’s headquarters in our town might be sitting next to a Mexican immigrant construction worker.  A Nigerian family sits beside a family of El Salvadoran political refugees who rub shoulders with a couple who fled Vietnam. I can spot a heart surgeon sitting by a truck driver next to a college professor next to a waitress next to a suburban dad, mom and five kids next to an elderly widow and an unemployed drifter with mental health problems.

Its tough to achieve fellowship from such a wonderfully varied congregation. This strength of Catholicism (“Catholic” after all, means “universal”) however, reveals one of the intrinsic weaknesses of the Protestant religion. The many different forms of Protestantism cannot transcend their particular socio economic, historical and cultural origins to achieve an organic unity.

Protestants find fellowship easy because, for the most part, their churches are rooted in the same cultural and historical milieus as their devotees. Many Protestants do an admirable job of evangelizing others, but invariably, if people from other ethnic groups join their church they tend to adopt not only the religion, but the cultural and socio economic values.

When Protestant missionaries have converted people of other cultures they have invariably and unintentionally converted them not only to Christianity, but to their own Protestant European-based culture. There is something quaintly English about African Anglicans and something oddly Scottish about Presbyterians in Togo. Catholicism can also be accused of cultural hegemony in the name of evangelization, but there has always been at the heart of Catholic evangelization a desire to adapt Christianity to the native culture wherever possible.

When Protestantism does succeed in adapting to other cultures or ethnicities it loses its sense of identity, splits off and creates a new entity. Continue Reading