The Rainbow Flag or the Confederate Flag?

The Rainbow Flag or the Confederate Flag? 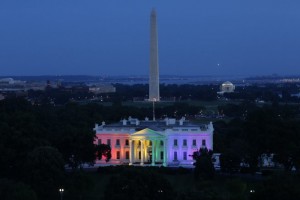 Reactions to two flags in America sum up the nation’s mood.

The Rainbow Flag has come to stand for the gay liberation movement. It has triumphed at the Supreme Court on Friday, and almost like the timing was planned,  the weekend saw Gay Pride parades across the world in which the rainbow flag was omnipresent.

The Rainbow President even had the White House lit up in a rainbow flag.

This omnipresence of the rainbow flag was celebrating a lifestyle and a Supreme Court decision that trampled on the right of the American people to rule themselves.

As Tom Hoopes has observed here:

What has it [the Supreme Court] done, and what has it not done in its Obergefell v. Hodges decision legalizing same-sex marriage?

What it has done is grab power from the people. More than 50 million Americans have voted against same-sex marriage. The Supreme Court has now told them that they do not have the power to write their own laws, prompting Chief Justice Roberts in his dissent to say, “Just who do we think we are?”

So it could be said that 50 million Americans disapprove of the rainbow flag and all that it stands for, but it must be emblazoned across the White House, consumer products, celebrity parties and just about every website, news outlet and advertising billboard, paper or poster.

The rainbow flag you MUST wave.

Joseph Pearce writes presciently here on the banning and burning of flags.

I cannot help feeling that a culture that advocates the banning or burning of flags is on the slippery slope to becoming a society that advocates the banning or burning of books. To fight intolerance with intolerance is to fight fire with fire, or, to extend the alliterative analogy still further, it is to fight fascism with fascism. Those of us who cherish our freedom cannot help but be disturbed by this turn of events.

The symbolism of the two flags and the nation’s mood should not be wasted on us. Continue Reading