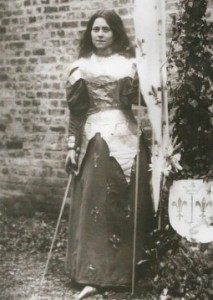 Here is my article for National Catholic Register on the astounding things that happened in the first world war.

She said she would spend her heaven doing good on earth, and her wish to be a warrior was also fulfilled. She once had a prophetic dream: “I went to sleep for a few moments during prayer. I dreamt there were not enough soldiers for a war against the Prussians. You [Mother Agnes] said: ‘We need to send Sister Thérèse of the Child Jesus.’ I answered that I agreed, but that I would prefer to fight at a holy war. But, finally, I went all the same.”

The First World War broke out just 17 years after her death. There were some 40 recorded apparitions of Thérèse to soldiers on the battlefield. She appeared holding a cross or sometimes a sword. The soldiers reported that they saw her, spoke to her — and she to them. She helped them with temptations, calmed their fears and protected and converted them.

Check out my book St Benedict and St Therese: The Little Rule and the Little Way.