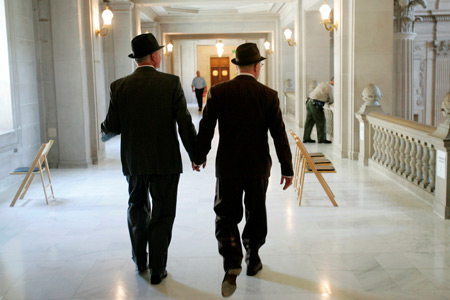 There was a case some years back when same sex  civil unions were legalized in Britain in which two elderly sisters applied to get married so one could inherit easily if the other died.

As I remember, they were denied their civil rights. I guess that was not only a case of two women marrying, but the fact that they were sisters raised a few eyebrows.

But these two Irish chaps seem to have managed it. You can read the story here.

The case does raise a good number of questions, and it only takes a few minutes’ thought to wonder why our lawmakers–including the highest court in the land–thought it wise and sensible to legalize same sex marriage.

Putting all questions of Catholic morality on one side for the moment, this case makes us ask again, “What exactly IS marriage?”

I guess most people in society would suggest that marriage is a civil union between two people who love each other.

Do we say that it is for life anymore? Quick no fault divorce would seem to be part of the deal now, so we can’t really say it is for life.

If it is possible for two homosexual people to marry, we might say it is a union intended for mutual support between two people, and the two Irish guys who were heterosexual would show that their “marriage” validated what was a long term, non-sexual friendship.

If that is the case, then any pair of friends can marry and who can object?

However, if marriage is not only for mutual support, but is also for the foundation of a family through procreation, then we’d have to say that these two old fellows really can’t have formed a marriage.

But then, the marriage relativists would say, “An old man and an old woman who are past the age of sexual relations and child bearing can marry. How is this different?”

It all goes to show that marriage, as we once knew it, has evaporated.