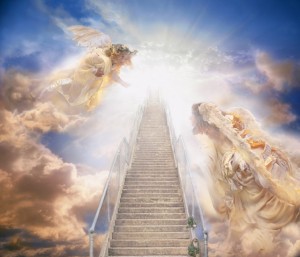 We we all take that express escalator straight to heaven?

“Catholic” means “universal” but “Catholicism” does not mean “Universalism”.

Universalism is the false doctrine that everybody will be saved.

This is a sentimental belief held by people who are so cushioned from the realities of life that they don’t know anybody who deserves hell and they think God is just as nice and polite as everybody they know and so wouldn’t have such poor manners as to send anyone to hell.

They associate the “wrath of God” with an error in taste. For them being angry is a sin because, well, it’s so “inappropriate” and “not really very nice.”

Universalism is is widespread not only among the progressive Protestants, but also among many Catholics.

The evidence that it is everywhere is the way everyone now talks about death. As soon as someone dies everyone says, “Jimmy is with Jesus now” or “Grandpa is in heaven with the angels.” Maybe or maybe not.

Catholics believe that most people don’t go straight to heaven. If we are not in a state of mortal sin most of us go to Purgatory to finish our work of purification.

Everybody goes straight to heaven when they die? I’ve never understood how anyone with half a brain can subscribe to such a goofy creed. Doesn’t ordinary human decency demand hell for the depraved beast who stalks little girls, abducts them, tortures and rapes them and then chucks their bodies in a ditch when he’s done and never has any remorse?

When you hear about ISIS terrorists burning people alive or throwing gays off rooftops don’t you say, “They should burn in hell” and aren’t you righteous for doing so?

How on earth can anyone who has read the gospels even one time through come up with such an idea? Jesus talks more about hell than he does heaven, and whenever he does it is to say quite clearly that hell exists and we should fear hell. The gospel is just about as clear as it can get.

In Luke 13:23 someone asks “Lord will many people be saved?” He replies, “Make every effort to enter through the narrow door, for many will try to enter and not be strong enough.” He then goes on to tell a parable about the master who knocks the door and refuses to recognize those who claim to have a right of entry to the master’s house.”

Not only is universalism alien to Scripture, it doesn’t make a lot of sense in marketing terms. For thirty or forty years now progressive Catholic priests have been teaching either universalism or ‘semi-universalism’ (which is the belief that probably everyone will go to heaven eventually)

Then these same fellows turn around and wring their hands and wonder why vocations to the priesthood and the religious life are dropping through the floor and why mass attendance is down, or why the few Catholics they do know are so quick to join Evangelical sects. Continue Reading