What I Learned When I Visited a Casino…

What I Learned When I Visited a Casino… 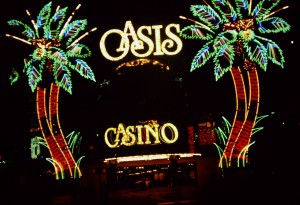 Then some years ago I visited Detroit and my host took me out to lunch.

“i’m Bob. Where do you want to go to lunch Father?”

“I’ll take you to the casino.”

As we went along I said to Bob, “I’ve got a confession.”

“I’ve never been to a casino.” So I told Bob about my strict Protestant upbringing. He was amused.

At the casino Bob taught me how to play craps. We wondered around and he explained the different games.

Then we had lunch.

Over lunch I quizzed Bob about casinos and gambling.

He told me he could afford to gamble  because he was rich. He admitted that he usually lost, and explained, “You see, you’re not allowed to cheat, but the casino owners? They don’t exactly cheat, but every game is stacked in their favor. Maybe just a bit, but its true. The house always wins. You have to understand that every detail of a casino is carefully designed to first get you in the door and then to keep you there until they have taken as much of your money as possible. That’s how casinos work. That’s their business. They’re very good at it.”

So I asked him whether he felt it was a good business to be in.

Bob was a good Catholic and at that point he looked a bit ashamed. “I’ll tell you what. It’s a dirty business. You know back there at the crap tables? I was playing for entertainment. Did you see those young black fellas? They were playing for their rent money. They shouldn’t be there. Let me tell you something else. You wanna hear what’s really dirty?”

I was spellbound. “Tell me.”

“Did you see all those old people playing the slots?”

“Well, the casino owners run busses out to the local rest homes. These are mostly retired auto workers. They’re not rich people. The casino owners give them a free bus pass, a free night in the hotel, some meal vouchers and ten dollars worth of free chips. It’s like bait. There’s grandpa and grandma sitting in their rest home. They don’t have much money. Maybe they haven’t had a vacation for twenty years because they’ve saved and worked to put their no good kids through college. Then they get a free bus pass to the glitzy casino and think they’ll take a little vacation. Then they get here and get addicted to gambling. Pretty soon they’ve gambled away all the money they had saved for retirement and some of them end up homeless or they have to go to state run rest homes…and you know what they’re like.”

Finally he  said in a half whisper, “Here’s these guys who are already filthy, obscenely rich. I’m rich, but let me tell you, these guys are very rich. They’re not only rich. They’re corrupt. They’re mostly gangsters and the mob. These animals who are already so rich are devising clever plans to get poor old people into their casino so they can get as much of their money as possible before they die.”

“Definitely not good.” said Bob. “Furthermore, these casinos? They’re full of strip clubs, drugs, prostitution. You name it. You got it. All supplied by the gangsters who run the casinos.”

I know! Let’s elect a casino owner to be our next President!