Why Build a Romanesque Church Today?

Why Build a Romanesque Church Today? 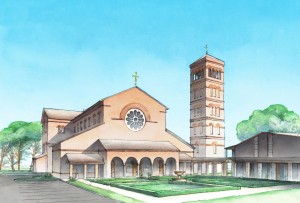 When I arrived at Our Lady of the Rosary parish one of my first tasks was to meet with the Building Committee.

The folks in the parish had been trying to build a church for about twenty years off and on and for various reasons it simply didn’t get done.

Now it was my job.

So we rolled up our sleeves and began gathering information.

That ruled out the usual template, popped out of a box fan shaped auditorium they were offered by some mainstream architects.

Instead they had decided on a modest Romanesque style building.

We began to explore why Romanesque would work for a modern church, yet still be traditional in style

We opted first of all for a traditionally styled church because the congregation, in the predominantly Baptist South, wanted a church that “looked Catholic”

Down here the Baptist churches all look like clones of each other. Bland neoclassical style with pillars and a porch and a plastic steeple. We didn’t want that.

Neither did we want the typical modern brick auditorium favored by all the other denominations including most of the Catholics.

Most of the suburban churches built in this sun belt growth area are all the same–whether they are Catholic, Presbyterian, Mormon or Methodist. Brick auditoria with a few churchy looking features.

It is as if the architect said, “Right. Big box to seat how  many people? Got it. Toilets work. A/C works. Sound system works. What else do you need? An altar. OK. You can get one out of this catalogue. Pulpit? No problem. Turn to page 754. You want it to look more churchy? No problem. We can do that. You want round arched windows or pointed arch windows? We’ll slap some brick work in the shape of a cross  on the front and that’s it, and most of all it will be real cheap.”

We wanted to do something different–something that said, “This is a Catholic Church. It is in the great tradition. It is a church for today, but it a church that reaches back to Rome.” In other words, we wanted the church to be beautiful for worship, but also to make a statement to the wider world.

Romanesque is a simple architectural style, so we chose to save money by attempting an austere, almost monastic approach. It won’t be fancy and expensive.

In addition to this, Romanesque is a Catholic style that has travelled well. You can find Romanesque style churches all over the world, and with a wide ethnic mix in our parish we felt Romanesque was a universal Catholic style, best to be a statement of One, Holy, Catholic and Apostolic.

We’re delighted with the plans so far and are really excited that we may finally be breaking ground in the Spring or early Summer of 2015.

The price tag for this church is just $5m.

Between now and Christmas we’re trying to raise the final $650,000 we need to make this a reality. We’re making progress on this, but we need more help.

Can you make a gift today? If all my blog readers donated $100 we would raise more than the $650K we need!

If you would like to help all you need to do is go to this web page and make an instant donation through PayPal.

Don’t delay! Help us build this church! Click here and make as large a donation as you can.