Why Spend Money on a Pipe Organ in a Poor Parish?

Why Spend Money on a Pipe Organ in a Poor Parish? 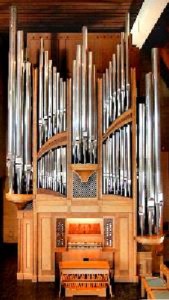 It’s true. The little parish of which I am pastor is not only the smallest Catholic parish in Greenville, it is also the poorest.

We’re located by a run down interchange on I-85. The demographics indicate the most socio economically disadvantaged population in our prosperous city. In addition to the residential low income and high housing density we also have a  problem with transient poverty. It is not only tractor trailers, businessmen and families on vacation who travel up and down our nation’s interstate. The interstates are arteries for humans too…homeless people who are shifted from one city to the next by the authorities.

So what are we doing not only building a beautiful church, but installing a pipe organ? Isn’t that extravagant in a parish where there is poverty?

I can hear Judas speaking…. He was the one, after all, who said the rich ointment used to anoint and worship Jesus should have been sold and the money given to the poor. A pipe organ is a magnificent instrument which will lift the heart to God and glorify Catholic worship. The document from the Second Vatican Council, Sacrosanctum Concilium states,

“… the pipe organ is to be held in high esteem, for it is the traditional musical instrument which adds a wonderful splendor to the Church’s ceremonies and powerfully lifts up man’s mind to God and to higher things.”

A pipe organ played well elevates Catholic worship. Instead of dumbing the worship down with sentimental ditties it lifts up the human heart and ennobles it, and who can use ennoblement more than the poor whose lives are too often reduced to the gritty realities of life. Do they not need a few moments of beauty, glory and splendor in their worship? Not only that, the fine music from an organ educates and illuminates the faithful–helping them in a world of shallow and crotch-centered pop music to learn how to listen to something finer.

Yes, we could have purchased an electronic instrument for half the price, but as one organist snarked to me when I proposed buying an electronic instrument, “Let me ask you a question Father. When a man proposes to his wife do you think he will buy a zirconium gemstone instead of a diamond? After all, to most people it would be indistinguishable, and it would be at a fraction of the cost….”

Shall we take the cheap option? Shall we bring plastic flowers to Our Lady?

If you would like to learn more about the pipe organ which we are purchasing go here. There is a video to watch and more information.

There is also the opportunity to make an instant donation to share this great cause with us. Go to the page and hit the “Donate” button at the bottom

Oh, by the way, it would also help if you were to share this blog post as widely as possible and get others to do the same!