Why the Catholic Mass Is the Center of All Things

Why the Catholic Mass Is the Center of All Things 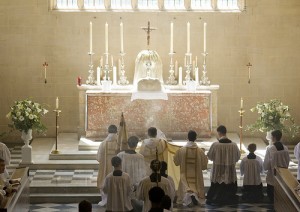 Stop for a moment and consider the turmoil and trouble in the world.

Diplomacy and nice talk does not work with those who are driven by ideologies of hate.

The ideologues gather in their tribes, ready to wage war and destroy the enemies they fear and hate.

It doesn’t really matter who the ideologues are. They may be Muslim fanatics, Christian, Buddhist or Hindu fanatics.

What is the response to such hate?

This response therefore puts one in the same category of the ideologue, and so the downward spiral continues into the hell of more hatred, darkness, deceit and death.

The other response is that of Jesus Christ. He stands up to the evil in his innocence and he takes the cross willingly.

He says, “Let me embrace the horror and by embracing it I will defeat it. By embracing the horror it is no longer a horror. By accepting the cross I will rise above the cross.”

So in his passion and resurrection he overcomes the evil and opens the way to a new understanding.

This is why the church has always and everywhere celebrated the martyrs, because they have been perfectly configured to Christ and have followed in his footsteps in the seemingly never ending encounter with evil. Continue Reading