Why the Kim Davis Case Matters

Why the Kim Davis Case Matters 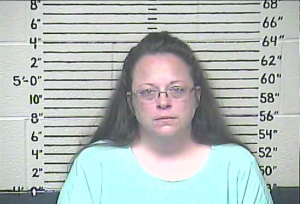 I’m sorry, but I can’t jump on the “Defend Kim Davis” bandwagon. I respect the woman’s faith and courage immensely, but I have explained here why I think her uncompromising stance is not actually the right decision at this time. In this article I compared her case to that of St Thomas More. If Ms Davis had been a Catholic rather than a Protestant Christian she might have had some historic examples of saints to guide her decision. I think she should have resigned. This is following a principle that one should always avoid martyrdom and persecution as much as possible while still being faithful to the gospel and to one’s conscience.

I hope Kim Davis is released from prison soon and that the authorities will find a way to allow her to keep her conscience clear and resign with proper compensation.

Whatever happens, and despite my personal disagreement with Kim Davis’ decision, I can still recognize that this case is historic for a whole range of other reasons.

First of all, it has made perfectly clear to Christians that there are judges in authority who will send people to jail if they oppose the same sex marriage ruling. Judge Bunning could have punished Kim Davis with a fine. He could have punished her with a short jail sentence as a rap on the knuckles. He could have allowed her to be jailed with bail. In fact he was very harsh. As I understand it she is jailed without bail until she chooses to comply and sign same sex marriage licenses.

This sentence is incredibly harsh and very worrying for all Americans who oppose same sex marriage. The judge ruled that she was in contempt of court and without a jury trial she was imprisoned indefinitely without bail. As I understand it she must remain in jail until she relents and agrees to something she cannot, according to her religion, agree to.

Is it possible that we have moved to this position so fast and with such injustice?

Furthermore, what crimes have these people committed? There is no law saying they must provide marriage licenses, wedding cakes and flowers for gay weddings. The anti-discrimination laws are often not even up to speed on this issue. (although I expect they soon will be) So these people are being thrown into jail indefinitely without trial by jury and without due process of law at the sole decision of a judge?

We have already seen how the judges have over ruled the majority votes in state after state and the Supreme Court has over ruled the majority opinion of the people concerning same sex marriage. The precedent that has been set in the Kim Davis case is that a judge can use his powers in the area of contempt of court without restraint.

Whether you agree with Kim Davis’ personal decision or not the bottom line is this: a person who is opposed to same sex marriage for religious reasons has been put in jail indefinitely until she changes her mind. Continue Reading