The Terminator – Will the Machines Take Over?

The Terminator – Will the Machines Take Over? 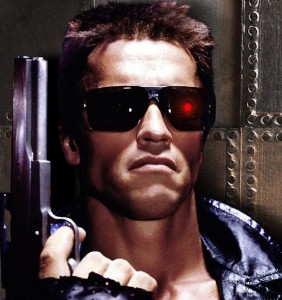 Rise of the Machines?

Just last night I was talking with the sixteen year old about the sci-fi possibility that the machines will take over.

Will computers take over? Will the Terminator scenario–the rise of the machines really happen?

In this article from the Daily Telegraph Apple co-founder Steve Wozniak suggests just that:

“Computers are going to take over from humans, no question,” he said in an interview with the Australian Financial Review.

He explained that strong artificial intelligence, which would recreate the power and creativity of the human mind in software, is a risky thing for researchers to strive for.

“Like people including Stephen Hawking and Elon Musk have predicted, I agree that the future is scary and very bad for people. If we build these devices to take care of everything for us, eventually they’ll think faster than us and they’ll get rid of the slow humans to run companies more efficiently,” Wozniak said.

While artificial intelligence machines might excel humans in certain tasks it is difficult to imagine how they will be able to do the things that make humans most human, and those things are not the useful things like running an army or a business or building a machine or a new sewerage plant.

The things the computers and robots will never be able to do are the best things the humans do–the stuff that is useless.

I’m talking about all the things human beings do that really have no use at all. Here’s a list:

The list could go on. Robots and machines will never do all that stuff because nobody will be bothered to program them to do that useless stuff because why would they? What would be the point? Where would there be any money or anything useful in it for anyone?

Robots and machines will only ever be useful gadgets because they have no soul. They have no understanding of why anyone would ever want to or need to do the useless stuff. The machines and their makers are too rational. They would get all confused and say, “But what is the use of playing soccer? I can’t understand why someone would want to learn to tap dance. What is the point of flower arranging, or learning to cook Indian food or painting a picture or going to see an opera?”

Neither would they (like their makers) have any religious sense because religion–above all things–is seemingly useless. Why kneel to pray? Why sit in rapt silence before the Blessed Sacrament? Why behold angels and miracles? Why sing a hymn or give an offering? Why build a beautiful church or baptize a child? Why anoint a dying woman with oil, carry palms in procession or light a candle before the statue of a saint?

Computers take over from humans?

They’d have to understand what makes a human a human first and that’s something they can’t do–and something I fear their makers also have trouble understanding.