Witness in Words and Works…Or Else!

Witness in Words and Works…Or Else! 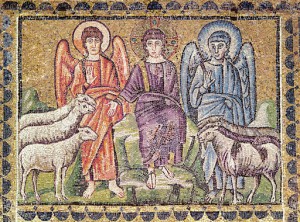 Oh how people love that quote attributed to St Francis: “Preach the word at all times. Use words if necessary.”

It has become one of those religious bromides alongside “To travel well is better than to arrive.”

While the little quote is certainly true, and a cleverer way of saying “Actions speak louder than words” at the same time we need to be reminded that words are also necessary.

But before we go there we should stop and affirm that good works are important.

It is pretty hard to sidestep the parable of the sheep and goats in Matthew 23  in which Jesus reminds us that there will be many hypocrites who say, “Lord! Lord!” and he will say “Depart from me, I never knew you.” because they had not fed the hungry, housed the homeless and visited the prisoners.

If we don’t do this work, then the epistle of James says our religion is not real and Matthew 23 says we’re going downstairs not up. The serious question I pose therefore, for myself and for every other person who professes to follow Jesus Christ is–what have you done for the poor?

This is one of the lessons I am learning from Pope Francis: that the gospel of Jesus Christ is authentically communicated to the world by the counter sign of ministering to the poor. This is what Christ did in the world. This is what we do as the Body of Christ, and if we are not doing it our religion is fake. I’ll repeat that. If we are not doing this our religion is fake. Phony. Plastic. Empty. Unbelievable. Unreal. Worthless.

We may create beautiful liturgies, promote fine music, and the best literature to communicate the gospel. We may be filled with the Spirit, speak in tongues, enjoy charismatic raptures and have mystical visions. We may be theologically correct, make all the right apologetics arguments and strictly uphold orthodox theology. We may be morally pure, uphold a “good marriage” and avoid serious sin.  But if we do all these things and do not have charity for our neighbor it’s fake. It’s plastic. Empty. Unbelievable. Hypocritical, Worthless.

But if all we do is minister to the poor then, as Pope Francis says, we are no more than another NGO–a secular charity–a group of humanistic do gooders. Continue Reading.