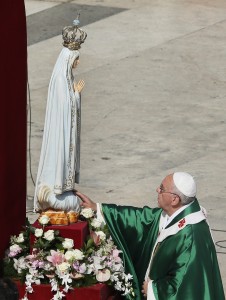 Today Catholics celebrate the anniversary of the apparitions of the Blessed Virgin Mary to three shepherd children in the Portuguese village of Fatima in 1917.

These extraordinary events can be seen as ushering in the catastrophic twentieth century. By 1917 the first World War was grinding on with horrors never before imagined by the human race. The lady of Fatima predicted another war if mankind did not repent. This war would be presaged by a heavenly sign. This took place with an amazing display in the night sky across Europe on January 25, 1938–just before Europe was plunged into another war.

The rest of the century would witness untold misery and bloodshed in genocide, atomic warfare, terrorism, famine, natural disaster and the rise of technologies that would poison nature, destroy the family and set humanity on a course of self destruction.

The miraculous nature of the events at Fatima have been affirmed by the church and most of the popes of the last century have had a strong personal and seemingly apocalyptic association with the prophecies given to the three children. The co-incidence of the dates of May 13 (when the apparitions began) and October 13 (when the apparitions ended with the miracle of the sun) are interesting. Pope Piux XII was consecrated bishop on May 13, 1917 – the day of the first apparition and became known as the Fatima Pope. He consecrated the world to Our Lady of Fatima and made repeated references to the prophecies.

Paul VI met the visionary Sister Lucia and prayed with her on May 13, 1967–on the fiftieth anniversary of the visions. John Paul II was almost killed by an assassin’s bullet on May 13, 1981, and six years later on the seventieth anniversary of the visions went to Fatima to give thanks to the Virgin for saving his life.  Benedict XVI affirmed his belief in the supernatural origin of the visions, visited Sr Lucia, went to Fatima and said “the prophecies of Fatima are by no means completed.” Pope Francis had his papacy dedicated to Our Lady of Fatima on May 13, 2013 and consecrated the world in a public ceremony on October 13, 2013. He has the image of Fatima in Rome  today to be venerated and plans to visit Fatima in 2017 for the centenary of the events.

Seeing that it is one hundred years since the events makes one wonder how significant this anniversary in two years’ time is for world history. Continue Reading