A Catholic Way of Seeing

A Catholic Way of Seeing 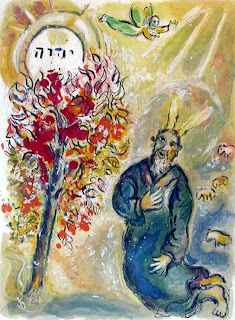 When I suggested to a Protestant that the Burning Bush was a foreshadowing of the Virgin Mary (it burned with the fire of divine love, but yet was not consumed) I was blamed for reading back into Scripture something that wasn’t there.

Well, it is very difficult for modern Christians to understand the Hebrew and early Christian perspective on Scripture, and for that matter on all things. They have been trained in the literary critical method. They have imbibed as a given the cynical, literalistic, rationalism of the historico-critical methods of Biblical interpretation. They have learned to look for the surface meaning and no other. Like the village idiot, who took apart the clock to discover time, then couldn’t put it back together again, they dissect sacred Scripture looking for the ‘true meaning’ which they never find and then ridicule people, who through a mystical exegesis propose that they have found the true meaning. Alas, the gap between these two mindset, these two sets of assumptions, these two world views is practically unbridgeable. Two persons of these opposing mindsets may discuss Scripture endlessly, but they are like two tennis players attempting to play a game on adjacent courts.

The rationalistic, ‘enlightenment’ educated Protestant will see the burning bush and say, “It was a tree in the desert of Horeb that had bright red flowers on it, and in the radiating waves of heat in the desert, and being a bit light headed from hunger and heat exhaustion, Moses thought it was ‘on fire’ and he then had a ‘mystical experience’ which he interpreted as a revelation from God.” If he does not take quite so extreme a literalistic, non miraculous interpretation he may say, “It was a bush. A bush is a bush.”

In the meantime, in concert with the Fathers of the Church, the Hebrew wise men, the saints and mystics of the ages, the Catholic (or at least a certain kind of Catholic) will say, “Ah, the burning bush. It is not simply a burning bush. It is a miraculous moment. It is a divine revelation to humanity of more depth and wonder and meaning than we can articulate. It is  the burning love of God. It is a the Holy Spirit fire. It is the Sacred Heart of Jesus–burning with an unquenchable fire–aflame always and yet never consuming the human heart. It is the Blessed Virgin Mary who was overshadowed by the burning love of the Holy Spirit, who became the mother of the burning babe while never having her virginity consumed. It is not just a burning bush it is the burning radiance of the mystery of the Immaculate Conception. It is the burning fire at the heart of the altar of God in heaven. It is the candle on the altar, the charcoal in the thurible, the blaze of the pillar of fire and the tongues of flame at Pentecost.

Or then you could just say it is a bush.

So the Catholic lives within a tradition that views all things in a radically different way from the ordinary rationalistic, enlightenment-educated man. Of course, there are many Catholics who do not view the world this way, and there are many non-Catholics who do. (I am using the terms in an open ended way to make a larger point) This more Catholic or perhaps ‘poetic’ way of viewing the Scriptures and all things is something which is difficult to explain. You either see it or you don’t. Are we reading things back into Scripture which aren’t there? Yes and no. We are aware that the writer of Exodus did not mean to record the story of the burning bush with an knowledge that he was pre-figuring the Immaculate Conception. However, we also believe that all things are woven together in the mysterious divine providence in deeper ways than we can see and with stranger patterns than we can understand.

We believe that when Adam and Eve first fell the Divine mind already foresaw the beauty of the second Adam and the second Eve. Therefore when the Lord revealed himself as ‘I AM’ at the burning bush we also see that he knew–even if the prophet did not–that the burning bush through which he was revealed was the implicit revelation of all truth and every aspect of truth for it was a revelation of himself. If this is so, then we are not reading anything back into the burning bush. Instead, as one looks through a gemstone and sees reflected and refracted there the whole surrounding world, we see through this story and every other the whole of God’s mystery revealed.