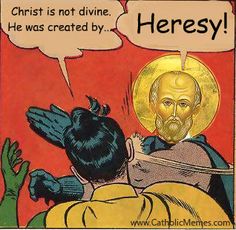 In commemoration of St Nicholas who famously slugged the heretic Arius I publish this piece written a few months ago for The Catholic Thing website:

There was an odious man named Frank in our fundamentalist church when I was a boy who had a brood of badly behaved children. When one of them would act up Frank would haul the miscreant out of the sanctuary to wallop the child. When he would re appear with the unfortunate sprog Frank would mutter sanctimoniously, “Sometimes we need to administer love to our children.”

The memory brings to mind another fracas at church an earlier time. At the council of Nicea Bishop Nicholas of Myra punched the heretic Arius in the face. Arius had been asked to defend his doctrine that Jesus Christ was only a created being and not God incarnate. The future Santa Claus, fed up with this nonsense, got up and administered some love. St Nicholas is also known as Nicholas the Wonderworker. Some work. Some wonder.

Nicholas was not the only one of the fathers inclined to physical expressions of orthodoxy. St John Chrysostom was so troubled by extremist Christians who advocated teetotalismthat he preached a homily encouraging the faithful to brawl in the streets:

Paul is not ashamed… in writing to Timothy, to bid him take refuge in the healing virtue of wine drinking. Not to drink wine?  God forbid! For such precepts belong to heretics …since our discourse has now turned to the subject of blasphemy, I desire to ask one favor of you all…which is, that you will correct on my behalf the blasphemers of this city.

Should you hear any one in the public thoroughfare, or in the midst of the forum, blaspheming God; go up to him and rebuke him; and should it be necessary to inflict blows, spare not to do so. Smite him on the face; strike his mouth; sanctify your hand with the blow, and if any should accuse you, and drag you to the place of justice, follow them, and when the judge…calls you to account, say boldly that the man blasphemed the King of angels!

Most of us would demur at the suggestion of following John Chrystostom’s robust advice. Explaining to the sheriff that we had struck the progressive Christian because he had “blasphemed the King of Angels” is not our style. Our new beatitude is “blessed are the milquetoast for they shall inherit a peaceful life.” We prefer to do battle with words not swords for we are sure that keyboard tapping fingers are more effective than face slapping fists.

Nevertheless virulent, vituperative and even violent attitudes towards heretics are part of Scripture. St Paul inveighed against the legalists who insisted that the Gentile converts should be circumcised, saying that he wished they would go the whole way and castrate themselves. (Gal.5:12) Meanwhile St Peter wrote these choice words about heretics in the early church:

There will be false teachers among you, who will introduce destructive heresies…Continue Reading