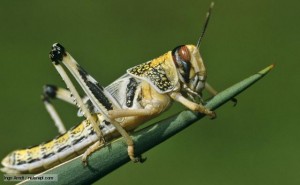 On the second Sunday of Advent I am always intrigued by John the Baptist’s diet of “locusts and wild honey.”

The locust is a large grasshopper common in many places of the world. Known for swarming and devouring huge swathes of greenery and causing famine, it could be that the people of the Middle East caught the critters and ate them. Kind of “eat or be eaten” if the swarms were going to demolish their own crops.

On the other hand, did John the Baptist live in a cave somewhere and live on such a basic diet hunting and gathering. Was he some kind of wild man scrounging around he desert for the odd insect which he popped into his mouth crunching away happily? Did he follow bees back to their hives and endure terrible swarms of stinging insects to gather the precious honey?

There are three scholarly opinions about John’s diet.

The first is that the “locusts” mentioned really are grasshoppers. In fact, in the Middle East even today locusts are eaten. Here’s an article about eating fried locusts. We eat shrimp. It’s not so different. Furthermore, the article points out that locusts are kosher. Jews can eat them. The other way to eat them is to trap them in nets, let them die then dry in the sun. They are then gathered and crushed into a powder and mixed up into a paste and fried.

So he could have eaten insects. However, others claim that the “locusts” refer to the pods and beans of the locust tree. However, these trees aren’t widespread in the region and there is a history of Middle Eastern and African people being creating with their locust cookery, so it is more likely that he did eat the locusts in one form or another.

Another intriguing idea, which has deep Eucharistic and historical significance is that the “locusts” refer to a kind of honey caked. This blogger reports:

A possible solution to this confusion about John’s desert diet is found in the fragments we have of the lost “Gospel of the Ebionites,” as quoted by the 4th-­century Christian writer Epiphanius. The Greek word for locusts is very similar to the Greek word for “honey cake” (enkris/εvκρις) that is used for the “manna” that the Israelites ate in the desert in the days of Moses. If this is the case then John would have eaten a cake of some type, made from a desert plant, similar to the “manna” that the ancient Israelites ate in the desert in the days of Moses. This “bread from heaven” is described as “like coriander seed, white, and the taste of it was like wafers made with honey” (Exodus 16:31; Numbers 11:8). This kind of “pancake” baked in oil, and sweetened with honey, would then reflect and emulate the ideal holiness of the desert wanderings of Israel when the people had to look to God alone for “daily bread.”

So it is very possible that John ate grasshoppers in one form or another. It was the food of poor people and would have been consistent with his ascetically lifestyle, but the reference to honey points to the possibility that  he lived on a simple type of way bread.. This fits nicely with the idea that John in the Wilderness re-capituates the whole of the Old Testament–he is in the wilderness like the people of Israel eating honey cakes like manna. Combined with the fact that the gospel links him with the Judges (Samson) the miraculous births (Sarah and Samson’s mother) Elijah and Isaiah, it would seem that the third option may be the one which is the most meaningful and real.

Honey cakes is also a heck of a lot nicer than eating bugs.