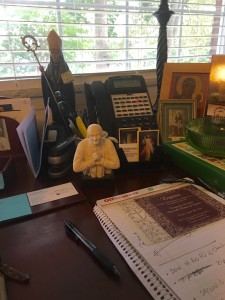 A View from my Desk

Today is the Memorial of St John Vianney, the patron of parish priests, and it is a good time to be reminded of the parish priest’s priorities.

If he is to be an alter Christus then he will try to do what Jesus did, and Jesus’ ministry consisted of four clear priorities.

He taught the truth. He battled Satan. He healed the sick. He forgave sins.

St John Vianney did all these things, and that is pretty much ALL that he did. When he went to the neglected country village of Ars he found the church in poor repair. The people were uncatechized, unconverted and wallowing in drunkenness, unemployment, poverty, ignorance and very kind of vice. He began to teach the faith from the pulpit, in men’s classes, in women’s groups, to the young and he built up the village school and employed nuns to run it.

He battled Satan famously. He kept all night vigils in which he would be thrown to the floor by Satan. He battled the vice, greed and violence in the town and confronted evil in its many different guises.

He healed the sick–not only physically, but spiritually, psychologically and in there relationships and heartaches.

Finally, he was a famous confessor. He heard confessions from huge numbers of people, so ministering Christ’s own forgiveness to them.

Most of all he did all four of these things by the faithful celebration of Mass, for in the Mass–celebrated with love and reverence–these four things take place. In the ministry of the word and preaching the faithful are taught the truth.

The Mass is, by its very nature, a battle against Satan. Time and again within the Mass we pray for the deliverance from evil. Satan hates the Mass because Jesus his eternal enemy and his defeat is there.

Finally, the Mass is the ultimate sacrament of forgiveness. At Mass we begin by asking for and receiving forgiveness, and through the Mass Christ the one who has authority to forgive sins is present.

These, therefore are our priority as priests. We are NOT first and foremost there to raise money, build buildings, administer paperwork, feed the hungry, house the homeless, worry about politics, counsel people and solve problems. These are all secondary. Many of them are good. Few of them are best.

I have a bust of St John Vianney on my desk and today he is moved further forward to remind me that the paperwork which is also on my desk…takes second place.