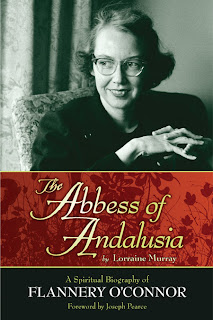 ‘Flannery O’Connor’s Spiritual Journey’ is the sub title of this excellent book by Lorraine V Murray. Murray is married to artist Jeff Murray who contributes to Joseph Pearce’s StAR Magazine–St Austin Review. I met Lorraine and Jeff at Joseph’s house for dinner a year or so ago, and we were discussing this book, so it is a joy to see it in print. St Benedict Press have done a great job on the design and layout of the book. St Benedict Press is a new publishing house just up the road in Charlotte NC. The whole production is a happy fruit of what might be called the New Southern Catholicism. Lorraine is a convert who lives in Georgia, St Benedict Press is part of the dynamic Catholic life in and around Charlotte which includes Belmont Abbey College, St Matthew’s Parish, the Catholic Company, Camps Kahdalea and Chosatonga–and all this just up the road from Greenville where Steve Wood lives and runs his Family Life Ministries, where Joseph Pearce lives nine months of the year, artist and illustrator Chris Pelicano lives here, mosaicist and iconographer Ruth Ballard lives here, and it is also the home of St Joseph’s Catholic School. Georgia and the Carolinas are a a good place to be Catholic. Y’all come!

Anyway, this post was meant to be a book review, not a plug for Catholic Carolinas. Lorraine has taken a radical step for a literary biography and charted Flannery O’Connor’s life from the perspective of her spiritual pilgrimage rather than a simple chronological plan. What emerges is a life that is truly monastic in it’s discipline. O’Connor goes out into the wide world from her Georgia farm to study at college and live in New York, then when she falls ill with lupus she retires back to the farm to live with her mother. There she writes every day for two hours. She occupies a simply furnished room (you can visit the farm as it was when she lived there in Milledgeville) Her stories and novels are produced in a painstaking manner–written and re-written and revised and edited and re-written again.

Murray shows how, at the same time, O’Connor takes time to write to friends about the faith. It comes as no surprise that O’Connor understands her Catholic faith thoroughly and steers her friends through choppy waters with a sure wisdom and confident advice. Through her letters and comments we discover a strong willed, intelligent, witty and eccentric woman. She likes birds, especially peacocks and she never flinches from her vision of God’s grace channeled through the grotesque and alarming characters of the deep South. O’Connor doesn’t mind poking fun at pompous priests, sentimental Catholic devotions, shallow hypocrisy and silly respectability. At the same time she exhibits a deep faith and genuine affection and respect for the nuns from the nearby convent and the monks at nearby Conyers. Lorraine Murray has given us a portrait of the artist which is realistic, solid, objective. We have an honest discussion of her private life without going into sordid speculations and faux Freudian wisdom. Like all good biographers, Murray does not impose her own views and personality. She quietly paints a portrait which reveals the artist, then she herself steps back.

Lorraine is also the author of ‘Confessions of an Ex-Feminist’. That she should produce a biography of one of America’s most important modern female authors is perfect. Without preaching a sermon about it, Lorraine shows Flannery to be a sort of answer to the strident, insecure and angry feminist who is trying so hard to accomplish something and usually only succeeds in stomping around in a huff. Flannery gets on with the job. She works quietly and confidently. She cuts down foolishness with her mixture of wit and intelligence. She understands faith, human nature and most of all herself. Like most accomplished women, she doesn’t really have time for feminism and doesn’t need it. In doing this, she shows us the true strengths of women–not by being somebody else, but by being most fully herself.

Lorraine Murray has produced an important book on O’Connor. I would have wished, perhaps for more discussion of her spirituality through the actual writings. Where Murray does bring in the characters and story lines her insights are brilliant. Perhaps that is what we’ll get in Volume II.