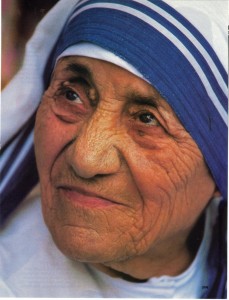 It was Mother Teresa who said,

I feel the greatest destroyer of peace today is ‘Abortion’, because it is a war against the child… A direct killing of the innocent child, ‘Murder’ by the mother herself… And if we can accept that a mother can kill even her own child, how can we tell other people not to kill one another? How do we persuade a woman not to have an abortion? As always, we must persuade her with love… And we remind ourselves that love means to be willing to give until it hurts…”

Jesus says, “Everyone loves their own children, and those who love you back, but I say love your enemy.”

Today he would say, “You murder your own children, so how can you expect to love anyone else?”

This deep hatred of a new human life must reverberate into a society’s self concept. We must hate one another if we cannot love even our own children.

The white man who killed blacks in a Charleston church or the black man who killed two white people yesterday–their being white or black has nothing. Nothing to do with it. Even if the killers thought that was their motivation. It was not their motivation. They didn’t hate black people or white people. They hated people, and the first person they hated was themselves.

Will this seething hatred, rage and fear at the heart of our society go away or get worse?

It will get worse. As long as we continue to kill unborn children we will continue to kill others. Furthermore, this seething violence in the heart of America will finally erupt either in social violence on a grand scale or in war.

Mark my words. When the dormant volcano of rage seething beneath the surface finally erupts it will erupt in war.

Buckle your seat belts. We’re in for a bumpy ride.