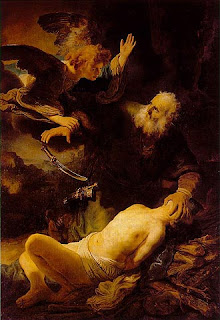 What I love about Abraham is the child like quality of his faith. God calls him to leave his country and his people to go to a new land, so he up and goes. Mind you, he never gets to enter the land, and only ever gets a glimpse of it, and wanders for the rest of his life living in tents.

Then God makes this great promise that he will be a great nation and have children more than the sand on the seashore, and the stars of the sky, but his wife is barren and they both live to a grand old age without children. Then when he finally does have a son, God asks him to take the boy up the mountain and sacrifice him there. So Abraham goes.

This child like faith and trust is simply awesome. It reminds me of St Therese. “Though he slay me, still will I trust Him.”

In fact, as Kierkegaard points out, the near sacrifice of Isaac never makes sense to Abraham. The only meaning he might just squeeze out of it is that the God he trusts does not, after all, demand human sacrifice the way the other pagan gods do. But what did it really mean? What was that whole absurd test about? What kind of a God is this who says, “Take your only son and kill him” only to say at the last moment, “Well, you don’t have to really. I was just testing you?”

This absurd, cruel and pointless exercise only makes sense two thousand years later, when, in the mystery of divine providence, the Almighty himself I (as he promised to Abraham) does indeed provide the lamb for the slaughter. He takes his own son and asks him to bear the wood up the mountain for the sacrifice, and there the one, full, final sacrifice is completed.

Suddenly Abraham’s sacrifice not only makes sense, it makes sense in a way that is so profound and mysterious that it strikes us dumb. Here is the greatest, and most mysterious meaning of all: that one seemingly absurd act of faithful obedience pays the riches dividends two thousand years later.