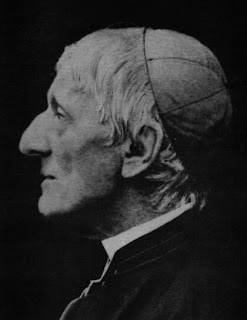 The Anglican Church in North America (ACNA) is a new Anglican body which promises to be ‘united and faithful’. You can read more about their formation here. I must confess, I have lost track of all the different breakaway Anglican groups, all I know is that there are now about 120 of them, (A partial listing is here) and guess what…they all say they are ‘united and faithful.’

The big question is: united with whom and faithful to what? It is very difficult to say just who this new group is united with. They seem to be mostly Evangelical former Episcopalians. Who, then are they united with? Themselves I guess, but not with the other 150 some Anglican schism groups? Certainly not with the Eastern Orthodox or the Catholic Church. So I guess they’re ‘united’ like every other Protestant group is ‘united’; that is to say, they are united within their own denomination.
The other question is: faithful to what? Not faithful to the Catholic faith that ‘comes to us from the apostles’, faithful to Anglicanism? Only as defined by the group itself. Faithful to the Scriptures? Only as interpreted by themselves. Faithful to Christian morality? Only as defined by themselves. Faithful to ‘Mere Christianity’? Who defines what that is?
Cardinal Newman said of church unity that without an infallible authority any group had to either sacrifice unity of form for unity of doctrine to preserve unity of form or will sacrifice unity of form to save unity of doctrine. As such, they would fall into either the latitudinarian error or the sectarian error. What this means is that any non-Catholic group will either lose formal unity in order to be on the same page doctrinally–in which case they breakaway to form a sect, or they sacrifice unity of doctrine (you can believe what you like) in order to preserve unity of form or structure. This is the classic Anglican position. “Believe whatever you like–just don’t form a schism.” For lovers of long words, this is called latitudinarianism.
What we are seeing is the disintegration of the classic latitudinarian position of the Anglican Church, as Anglicans decide that they would rather sacrifice unity of form for unity of doctrine.
Of course, it doesn’t take a German theologian to figure out that as soon as you form a new sect you are soon faced with another issue which will force your people to ask themselves again whether they wish to retain unity of form or unity of doctrine. They choose and either water down their beliefs (to retain unity of form) or they break away and form yet another sect.
PatheosDwight2009-06-24T08:07:00-04:00June 24th, 2009|Categories: Patheos|0 Comments