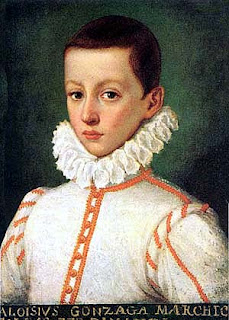 One of the most wonderful and interesting and amazing things about being a Catholic is that you keep on discovering more saints. I’d heard of Aloysius Gonzaga, but I’m afraid I first came across the name ‘Aloysius’ (and couldn’t figure out how to pronounce it) as Sebastian Flyte’s teddy bear. Then I happened into St Aloysius’ Church in Oxford. I still couldn’t prounounce it.

St Aloysius was born into an aristocratic family in Lombardy, and left his inheritance to become a Jesuit. He served faithfully and died at the age of 23 of the plague after catching the disease while ministering to the sick. He’s one of that army of great Counter Reformation saints. His spiritual director was Robert Bellarmine. I’m increasingly interested in them for two reasons:

Saints like Robert Bellarmine and St Francis deSales cheerfully countered the Protestants with debate, but more than that with saintly lives and loving spirits. I’ll never be a saint, but having been called to Greenville, South Carolina, I hope these two might look over my shoulder and keep me from making too many terrible errors. Aloysius Gonzaga touches my life today because I am chaplain to a school where most of the students are rather priviledged. Aloysius–who gave his life to God at an early age, and left his priviledged life to become a saint–is a good patron of our school.

I’m also intrigued by the Counter Reformation saints because I sense that we are in a kind of counter Reformation ourselves at the moment. We call it ‘the reform of the reform’. Vatican 2 took the church into a huge time of reform and upheaval. The changes were seismic. Thank God it hasn’t produced any major schisms, but there are certainly internal splits and there are many abuses and things going wrong with the Church. I pray that in these years of the second Counter Reformation (if indeed such a thing is happening) the Holy Spirit willl raise up in our midst a new Robert Bellarmine, some new Francis deSales, plenty of souls with the spirit of the first Jesuits, and maybe a few Aloysius Gonzagas.

The saints encourage me in a couple of other ways. First of all, I sometimes get discouraged. I seem to be making so little spiritual progress. I fail over and over again. I sometimes wonder if God really is doing that work of transformation in my life that he has promised. Then I look to the saints. It is possible to be totally transformed into the perfect image of God that he has intended each one of us to be! I’m also reminded that we cannot see with the eternal perspective. We don’t know what great things God is doing in the wider plan of history. We look back at the Counter Reformation and we see the great missionaries, the great martyrs, the great saints, and we are struck with awe and gratitude. But day by day in their own lives, they didn’t see what God was doing in the wider scheme of things. They didn’t know they were part of a larger movement. They didn’t know what a witness to posterity they were leaving behind.

Now that encourages me because I hope, just a little hope that maybe the best I can do today and the best you can do is to hang on tight and be faithful. Just to do our best and let God do the rest.