American Baby Killer on the $20 Bill?

American Baby Killer on the $20 Bill? 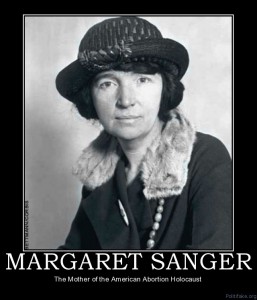 Apparently the New York Times is campaigning to have a portrait of eugenicist  Margaret Sanger on the $20 bill.

The New York Times is trying to stoke demand for the replacement of Andrew Jackson on the $20 bill, citing his cruel treatment of Indians. That has a certain logic to it, whether or not you agree. Besides, the Times says, it’s time we had a woman on some of our currency. Again, fair enough.

But it’s hard to take the paper’s objections to racism or its respect for women  seriously when one of the candidates presented in the Times‘ symposium is Planned Parenthood founder Margaret Sanger, a sexual libertine who fought to make birth control not just legal but mandatory — for members of racial and social groups whom she considered “inferior.”

Is there any way to stop this madness, this American love for killing babies?