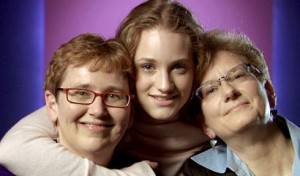 The Federalist carries this article by a young woman brought up by her lesbian mom and partner. It brings home the point that same sex marriage is not just about marriage, but same sex parenting.

The author grieves not having had a father.

She writes well on the issue, realizing how complicated it is, but making the clear point that being denied a father hurt her as a child.

Gay marriage doesn’t just redefine marriage, but also parenting. It promotes and normalizes a family structure that necessarily denies us something precious and foundational. It denies us something we need and long for, while at the same time tells us that we don’t need what we naturally crave. That we will be okay. But we’re not. We’re hurting.

Kids of divorced parents are allowed to say, “Hey, mom and dad, I love you, but the divorce crushed me and has been so hard. It shattered my trust and made me feel like it was my fault. It is so hard living in two different houses.” Kids of adoption are allowed to say, “Hey, adoptive parents, I love you. But this is really hard for me. I suffer because my relationship with my first parents was broken. I’m confused and I miss them even though I’ve never met them.”

But children of same-sex parents haven’t been given the same voice. It’s not just me. There are so many of us. Many of us are too scared to speak up and tell you about our hurt and pain, because for whatever reason it feels like you’re not listening.

I grew up surrounded by women who said they didn’t need or want a man. Yet, as a little girl, I so desperately wanted a daddy. It is a strange and confusing thing to walk around with this deep-down unquenchable ache for a father, for a man, in a community that says that men are unnecessary. There were times I felt so angry with my dad for not being there for me, and then times I felt angry with myself for even wanting a father to begin with. There are parts of me that still grieve over that loss today.

I’m not saying that you can’t be good parents. You can. I had one of the best. I’m also not saying that being raised by straight parents means everything will turn out okay. We know there are so many different ways that the family unit can break down and cause kids to suffer: divorce, abandonment, infidelity, abuse, death, etc. But by and large, the best and most successful family structure is one in which kids are being raised by both their mother and father.