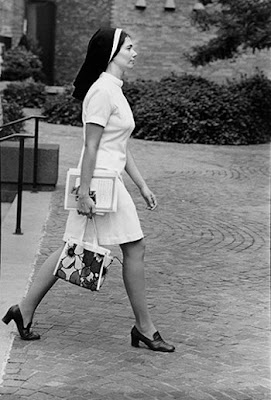 Sister Schneiders says the trendy sisters have “given birth to a new form of religious life.” Read it here.

At least they now admit it. The trendy sisters in mini-habits are doing something which isn’t really Catholic anymore. Sister says she’s not really very concerned about the new investigation into women’s religious orders that is going on.
To tell the truth, I’m not real concerned about the trendy sisters. They think they’re modern, but they’re really ancient. I mean they’re old. I don’t have anything against pious old ladies–the church runs on pious old ladies. The problem is, these sisters behave not like pious old ladies, but trendy young things.
They should stop and take a long hard look at themselves.  Their experiment hasn’t worked. Sisters left in droves once things started to change. Their orders are collapsing. Neither have they got new vocations. Good Catholic girls don’t want to join orders like theirs. Meanwhile the traditional orders are attracting lots of young vocations.
The persistence of the trendy sisters doing the same old tired thing is the same sort of lunacy as all liberal madness. “Our trendiness and dissent and new age kookiness isn’t attracting the young. I guess we weren’t trendy enough, dissenting enough and kooky enough. I know, let’s support homosexuality and ‘earth magic’ too…
PatheosDwight2009-02-28T09:57:00-04:00February 28th, 2009|Categories: Patheos|16 Comments