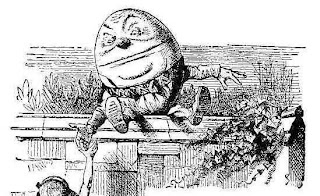 Comparing the Anglican Communion to Humpty Dumpty has many apposite connections. First of all, it’s a bloated, pompous old thing. Secondly it is famous for sitting on the fence (or in Humpty’s case–the wall) on every matter. Never a right or a wrong. Always a way to compromise: that’s Anglicanism.

Last summer Humpty the Dumpty had a great fall. And now, apparently all the king’s horses and all the king’s men (or the queen anyway) are trying to put Humpty Dumpty together again.
They think by some sort of administrative structure they can maintain the communion.

Ruth Gledhill reports on some of the intrique here.

Damian Thompson reports on the new proposals. This is lifted from his blog: See if you can understand any of it. Does anybody know whether this is serious or not?

the proposals are tied to an intricate scale of “degrees of communion” – full, impaired, partial and broken – that will ascribed to different provinces by a Lambeth Communion Review Commission, which will itself be multi-layered, supervising Review Sub-Committees based on the Indaba model that will ascribe State of Communion Assessments to individual dioceses, non-territorial episcopal oversight areas and parishes. It would, of course, be inappropriate for the same Review Sub-Committees to cross the boundary between inner and outer circles of the Anglican Communion, and so – in a radical proposal drafted by Dr Rowan Williams himself – the Lambeth Communion Review Commission will divide into inner and outer circle Areas of Special Responsibility that will shadow each other’s assessments.
The obvious snag here is that non-territorial oversight could be compromised by this process of shadowing, so the Review Commission will create what are, in effect, “episcopal no-fly zones” covering provinces in partial – but not impaired or broken – communion with Lambeth. Meanwhile, a Lambeth Communion Appeals Tribunal will be set up to negotiate boundary disputes between provinces (and, in exceptional circumstances, parishes) which receive alternative oversight within the inner circle. Boundary disputes within the outer circle will be referred to an independent tribunal accountable to the main Commission, except where the degree of impairment is sufficiently grave to qualify for a special appeal to those Primates of the Anglican Communion who have signed up to the original covenant.
What?
In the meantime, remember the Traditional Anglican Communion’s letter to the Vatican last year this time? We’re still waiting for a reply on this.
Maybe in the midst of all the Anglican Agonies a line will be thrown from the barque of Peter. I feel in my bones that the Vatican might just announce something positive about the Anglican situation quite soon.
PatheosDwight2009-04-24T12:58:00-04:00April 24th, 2009|Categories: Patheos|0 Comments