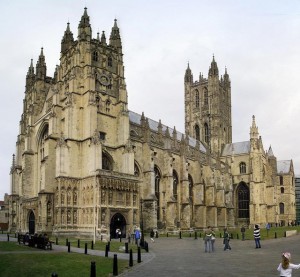 Canterbury Cathedral – Mother Church of the Church of England

This article for National Catholic Register explains why Anglicans claim to be Catholic, but have repeatedly burnt their ecumenical bridges.

Over the last four decades, Anglican-Catholic relations have become increasingly strained, as member churches of the Anglican Communion adopted an increasingly progressive agenda. In 1975, the Episcopal Church of the USA was the first to approve women priests; then, one by one, other member churches agreed first that women could be priests, and then bishops. The Church of England — the mother church of the Worldwide Anglican Communion — was among the last to agree to the innovations, with women’s ordination to the priesthood approved in 1992 and women bishops just last year.

Historically minded Anglicans like to maintain that their church is one of three branches of the historic Catholic Church — the other two being Roman Catholic and Eastern Orthodox. Most Anglican clergymen will explain politely that they are “Catholic, just not Roman Catholic.” However, when Catholics and the Eastern Orthodox insisted that women’s ordination was impossible, the Anglicans’ conveniently forgot that they were a branch of the ancient Catholic Church.