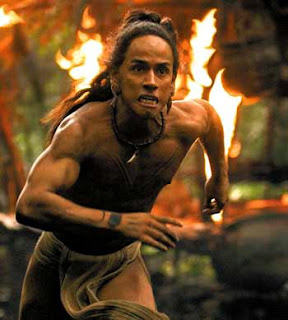 ‘Apocalypse’ stands for the end of time, but the word also means ‘Revelation’. Was Mel Gibson making a prophetic movie about our culture, a heroic underdog film or just a good old action picture with more gore than usual?

Some friends and I debated this after seeing the film a few weeks ago.

My own opinion is that Mel Gibson told us right up front what the movie was about. The opening quotation said something to the effect that a society cannot be conquered from without unless it has first decayed from within.

Those who quibbled about historical detail, the inaccuracy of the local dialect etc. etc. etc. are bores who don’t understand art, and we can move on from their criticism. The movie was an action adventure with a powerful underlying theme. It was an old fashioned hero’s quest with all the oomph that hero’s quests have had since Jason went looking for the Golden Fleece and Arthur hunted for the Grail.

The Mayan Civilisation was portrayed as technologically sophisticated and wealthy. It was cutting and burning the land, raiding neighboring tribes and destroying families for slaves. It was ruled by a rich, corrupt and cruel aristocracy. Most importantly, this inhuman society performed human sacrifice on a massive scale in order to appease their gods in return for the three ‘P’s’ of Protection, Prosperity and Power.

For ‘Mayan’ culture read ‘My’ culture. Gibson is holding a mirror up to our own American culture. Do we not rape and pillage other tribes for their riches? Do we not ‘develop’ other countries for their cheap labor? Do we not cut and burn the land, taking no heed to the environmental warnings? Do we not build (like Babel and Egypt) great towers to the sky to show our wealth and power? Most of all, do we not sacrifice innocent victimes (our own unborn children) to preserve our personal three ‘P’s’ of Protection, Prosperity and Power?

In the face of this decadence there are two heroes: the strong Father. Like his earlier heroes in Braveheart, Patriot and We Were Soldiers (in which the Father is also a strong Catholic) the hero is decent, honest, hard working and fearless. He sacrifices all for his wife and children and his integrity wins the day against the wanton cruelty and cynicism of his foes.

The second ‘hero’ or savior in Apocolypto is the Catholic Church. The arrival of the Spaniards takes us full circle back to the opening quote. The Mayan culture has decayed from within. That is why it can be conquered by the Spanish. Without whitewashing the negative aspects of the Spanish Conquest, I believe when the boat comes in with the friar bearing a cross, that Gibson is making a simple, clear and visual statement. He is saying, ‘The end is near, and here’s the revelation:’ There are only two things will save our own dying culture:

1. The decency and courage of individual heroic men and women and
2. The Catholic Faith.

Here endeth the sermon…errm… I mean the movie review.