Are Dolce and Gabbana Catholic Heroes?

Are Dolce and Gabbana Catholic Heroes? 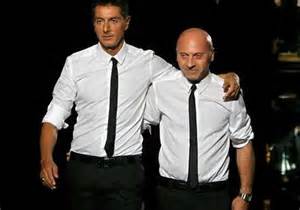 My latest article for CRUX analyzes the feud between gay fashion designers Dolce and Gabbana and Elton John.

Italian fashion designers Dolce and Gabbana waded into a gay rights hurricane last week by criticizing same sex marriage and “designer babies.” The storm started when Stefano Gabbana said in an interview with Italy’s Panorama magazine, “We oppose gay adoptions. The only family is the traditional one. No chemical offsprings and rented uterus: life has a natural flow, there are things that should not be changed.” Domenico Dolce added, “You are born to a mother and a father — or at least that’s how it should be. I call the children of chemistry, synthetic children. Rented uterus, semen chosen from a catalog.”

Elton John came out against the Italian pair in an emotional rant defending his children and the IVF process.

“How dare you refer to my beautiful children as ‘synthetic’. And shame on you for wagging your judgmental little fingers at IVF — a miracle that has allowed legions of loving people, both straight and gay, to fulfill their dream of having children.”

The clash between Elton John and Dolce Gabbana is a public conflict that reflects millions of head-scratching, heartbreaking dilemmas in families around the world. Because of the reproductive choices available, more sexual choices are available and, as a result, ordinary men and women are faced with extraordinarily complex ethical situations that our parents and grandparents could never have imagined.