Are Women Excluded from the Church?

Are Women Excluded from the Church? 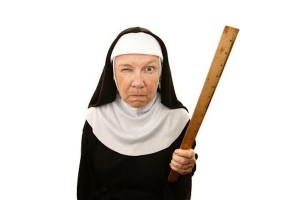 Excluded? I don’t think so…

Are women excluded from the Catholic Church?

Sister Knucklerapper needs to correct you on that….

Over at CRUX Elizabetta Provoked has a gentle whine about women feeling left out in the Catholic Church. While Vatican correspondent Ines san Martin reports on a conference in Rome on the role of women in the church today.

In the first two years of his papacy, Pope Francis has stirred great expectations for change among Roman Catholics who believe that the Church has not kept pace with the social transformations of secular society.

Nowhere are those hopes felt more keenly, perhaps, than among women, often the driving force behind local Church communities, but who say that their voices remain marginalized.

It sure looks that way when you visit the Vatican. The church is male dominated. Women priests? “That door is closed.” says the “Reformer Pope Francis.”

We need to make him understand that this is a make-or-break issue for the Church,” she added. “It would be an unbearable blow if he left the papacy as he found it with regards to women.”

Is this really a problem? From where I sit there doesn’t seem to be marginalization of women. Here are some examples:

Besides, what makes people think that a woman in power is going to be better than a man in power? Are women superior? Are women intrinsically nicer people? Are they free from corruption, vanity, lust, greed and power struggles?

If you want to see what a woman in ecclesiastical power looks like consider the Episcopal Church of the USA with Katherine Jeffers Schori in the top job. 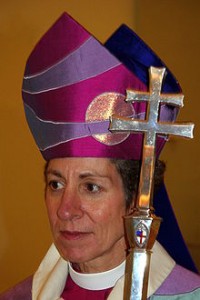 Her leadership of the Episcopal Church has been a disaster. During her reign she has sued congregations who want to leave, spending millions in legal fees. She has deposed 700 priests and 12 bishops who disagree with her and her draconian “reforms”. One Anglican group is pressing charges

The complaint, which includes six specific charges against Jefferts Schori, moves beyond property disputes to include alleged violations of Episcopal canon law related to financial irresponsibility in pursuing property claims, “seeking interpretation of [church] canons by secular courts” rather than ecclesiastical ones, and the “harassment” of dissenting bishops, priests, deacons, and laity through false claims of “abandoning communion.”

In other words, Jefferts Schori–the first woman to head a major Christian denomination has been an absolute tyrant. Where congregations have attempted to leave the Episcopal church she has not only sued them to keep the buildings and assets, but deposed the clergy and kicked out the people. When the defeated faithful have pointed out that she now has the buildings, but no people in them and maybe she would at least like to sell the buildings back to the people who built them and paid for them in the first place she has refused. Refused to sell. Refused to rent. Refused to lease. In fact, she put in a clause saying that the buildings could not be used by any group for “Anglican style worship” leading the buildings, in at least one instance, to be sold to Muslims and turned into an “Islamic Study Center” which is another words for a mosque.

My experience in the Church of England and anecdotal testimony from friends who are still in that church is that it is the same at the parish level. The extreme feminists will tolerate no dissent. If you don’t happen to agree to women priests, same sex marriage and the whole liberal agenda you’re rejected, excommunicated, kicked out of your own churches and expelled forever.

If one Catholic bishop behaved like the Anglicans regularly do the papers would be full of headlines about the Inquisition, male chauvinism, oppression, corruption etc. etc. etc. But if it is an Anglican woman bishop no one says. “Boo!”

Of course this is not to say that women priests and bishops are necessarily as wicked as Jefferts Schori–only that they’re not necessarily angels just because they’re women. If we’ve got an eye on corrupt, power hungry prelates we should not forget to keep an eye on the women just as much as the men.

The Catholic Church already has the answer to the problem of clericalization. It’s there in the gospels: “The Son of Man did not come to be served, but to serve….” It’s there in the most beautiful title of the pope” “The Servant of the Servants of God.”