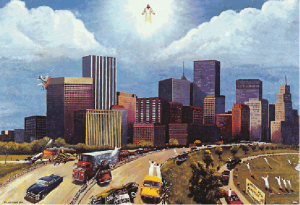 I grew up in a fundamentalist church.” I explained, “where we heard terrible prophecies about the Great Tribulation and the end times. An impish evangelist named Jack Van Impe would visit our church and scare us with stories about Armageddon and the big computer in Brussels called ‘The Beast,’ which tracked everyone, and how the European Community would merge with the Catholic Church to become the head of a New World Order, and the Jesuits had the names of all the born-again Christians, and they had taken a blood curdling oath of total obedience to the Pope, and when he gave the green light they would round up all the true believers.

Then they showed us a kind of Christian horror movie called “Left Behind,” in which the Lord Jesus returned and took all the true Christians to heaven in a flash, and airplanes fell out of the sky because their pilots had been raptured, and all the sinners were left behind, so you better get saved quick, and then we sang a lugubrious song called, “I Wish We’d All Been Ready” with the refrain, “There’s no time, to change your mind. The Son has come and you’ve been left behind….”

When I became a Catholic the apocalyptic stories were even more stupendous. The three days of darkness were just around the corner, and only blessed candles would be able to be lit. There were the prophecies of St. Malachy, which said the number of popes was running out fast, and why on earth couldn’t the pope consecrate Russia to the Blessed Virgin the right way? Didn’t he know the fate of the world was dependent on it? The exciting thing about the Catholics is that they actually had visions of Mary, stigmatics, visionaries, mystics and miracles, which raised the stakes and made it all so much more vivid.