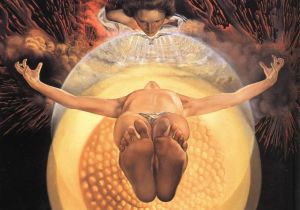 For Ascensiontide, today’s post is an excerpt from my book The Quest for the Creed.

This suddenly gives a new perspective on an old story. We have a paradigm shift. We see reality in a new way. When we think of Jesus Christ rising from the tomb we understand that it is not so strange after all. It is simply the way things work in that other realm. We see that, for him, resurrection is part of the natural/supernatural order of being. He went down into death. That means he must rise up into life. It’s as natural as water flowing downhill, but also as natural as water being evaporated. What went down must go up.  God came down to take the form of a human being. Therefore he must rise up again into the heavenly realm. It’s as simple as a sunrise. What goes up must come down? No. What comes down must go up.

It is this topsy turvy view of reality to which the Ascension of Christ introduces us to. Just as the Ascension reverses the laws of gravity, so it reverses all the expectations we had of reality. Here we say a resurrected person went up to heaven, and we are supposed to believe it really happened. There is something radical and revolutionary to this. It should be seismic in it’s alteration of our perceptions of reality, and yet we yawn and scratch and wonder what is for lunch.

The Ascension introduces us to a frightening and delightful new perspective of what we consider ‘reality’, and we don’t have eyes to see it. We’re blinded by familiarity with a religious story which we’ve seen in stained glass windows and illustrated Sunday School books; when what we are faced  with is an altered perception which should be as disturbing and disconcerting as one of those episodes of ‘The Twilight Zone’ that kept us awake and pondering.

Those who like fairy tales should love the story of the Ascension of Jesus Christ into heaven. Like Dorothy, who is swept up by a cyclone to Oz, Jesus floats up and disappears up into what must be a Technicolor heaven. Fantasy tales are full of this sort of thing. Peter Pan flies away to Neverland; Mary Poppins is whisked away when the wind changes, and the space ship comes to carry E.T. home to his peaceful planet.

It is easy enough to dismiss the Ascension story as a piece of first century science fiction. Jesus had to go somewhere after he rose from the dead so the first century Isaac Asimov said, “I know. Let’s beam him up. Sounds cool.” But it has the awful whiff of a deux ex machina ending, except in reverse.  There the god was cranked down from the theatre rafters to resolve the plot and bring a happy ending. Here the God is cranked up from the stage to disappear in a cloud of glory and live happily ever after. We can almost see the scenery shudder and catch a glimpse of the dry ice machine. It is easy enough to see the similarities of the Ascension to fairy tales and Broadway shows and assume that since the fairy stories are untrue that the Ascension is also untrue. But what if it is the other way around? We think the Ascension story is untrue because we have heard similar stories that we know are fantasy. But if the Ascension actually happened as it was reported, then it might be a kind of fulfillment of the other stories. In other words, instead of the false stories making every similar story false, the one true story might make all the similar stories true.

Think, for example of all the fantasy stories about princesses marrying handsome princes despite all the odds. Then when a real girl finds true love and marries the man of her dreams does she not make all the fantasy stories come true? When the man is transformed by her radiant and faithful love from a disgusting beast into a reasonably civilized husband and father have the couple not made all the beauty and the beast stories come true?

In a similar way, when a hero really does, in a unique incident, ascend into heaven he validates all those stories where the hero rises up, and flies away home. So rather than the fantasy stories making the gospel story untrue, it could be that the gospel story makes all the fantasy stories true. But for this to be the case we have to imagine in what way such an unbelievable story might actually have happened.

Can we even begin to believe that Jesus Christ was “beamed up” into heaven? It depends on your point of view. Continue Reading

To learn more about Quest for the Creed go here.