Atheism: Don’t Even Think About It!

Atheism: Don’t Even Think About It! 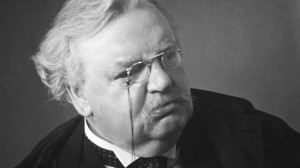 He can’t. An atheist must also be a materialist.

This is where  Chesterton’s observation in Orthodoxy ring home:

To re-word in it my favorite maxim, “A man is more often right in what he affirms and wrong in what he denies.”

Chesterton’s larger point is that the materialist’s denial is a limitation on the mind. The atheist has, as his starting foundation, ruled out a whole aspect of existence and a whole range of possibilities.

Therefore, because of his prior presupposition the atheist can’t really think about it. Should he honestly and carefully admit the possibility of the existence of God and the supernatural realm his foundation assumption is gone and he therefore has lost the only basis he had for thinking about the subject at all.

His foundation assumption must therefore be much much more unchanging and firm than any rock on which the theist builds his house.

To put it a different way, since atheism is based on a closed system it must lead to a closed mind.

The atheist’s worldview is too small, therefore his imagination is too small. His mind, as his worldview, has no room for the inexplicable. It is bound by the dull rules of materialism and what he considers to be the unbending laws of nature.

So the Church is a Mess? Not Sure What to Do?