Atheism or Catholicism – You Choose

Atheism or Catholicism – You Choose 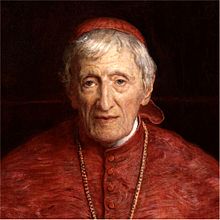 there is “no medium in true philosophy between atheism and Catholicism… a perfectly consistent mind, under those circumstances in which it finds itself here below must embrace either the one or the other.” – Bl. John Henry Newman

I’ve got this gadget on my home page that generates quotable quotes. You don’t know what you’re going to get next. Some are funny, some wise, some rude, some silly, some stupid.

My favorite silly one is from Groucho Marx: “Time flies like an arrow. Fruit flies like a banana.” Geddit?

Anyway, there’s one from George Bernard Shaw today, “There is only one religion, though there are a hundred versions of it.” This is typical of Shaw–who regularly debated with Chesterton about most anything and everything. It’s typical because an awful lot of what he wrote seems to be witty or wise on first hearing, and on reflection turns out to be silly and stupid. His aphorisms are sort of anti-Chestertonian the way Satan is anti-St Michael.

What on earth does he mean that “there is only one religion, though there are a hundred versions of it?” What he means is that all the religions are valid ways to the same truth. It’s not really much more than “Faith is like a mountain and we are all climbing up a different path.” This is only a short hop from the subjective quote about “All searching for God in our own way.” which is only a short hop from “Let us all find our own Truth” or the classic, “I’m interested in spirituality but not religion.”

What I mean by saying that “if it is a religion at all, then there can only be one version.” Is that a religion must be concrete if it is to be a religion. It must consist of something. Vague ‘religious’ sentiment doesn’t count. Dreamy feelings of ‘unity with the cosmos’ are unreliable. A moist eye at the sight of a puppy or kitten does not constitute religion. A religion has dogma. It has something you can get your head around and discuss and debate. A religion has a moral philosophy. It has a history. It involves real people. It has a liturgy. It has books and words and rituals and actions, and all these things are either true or false.

Catholicism–therefore is a religion. So it Hindusim and Islam and Judaism and Buddhism and Jehovah’s Witness-ism and a whole long list of other religions that have something to them. Why then did I say that there can only be one version of religion? Because if religion, by definition, consists of something. If there is something solid to it, then that something solid must be either right or wrong–true or false. It can’t simply be an interesting past time or an amusing hobby for people who like that sort of thing. If it is a religion it claims not only to be interesting or amusing but it claims to be true, so therefore we must examine whether it is true or not. Continue Reading