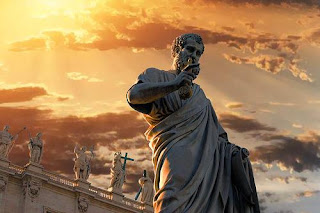 If such a religious authority were discoverable, what other traits would it have, and how would this infallible authority be exercised?

The Catholic answer is that the Catholic Church teaches infallibly because she is divinely inspired, and this divine inspiration began at St Peter’s confession of Jesus as Lord.  At that point Jesus not only said, “You are Peter, and on this rock I will build my church.” He also said, “Blessed are you, Simon, for flesh and blood has not revealed this to you, but my father in heaven.” This divinely given revelation was not only for that one confession of faith, but it illustrates Peter’s role within the divine economy from then on, because Jesus prophesies that on this dynamic relationship with God that he will found his church.” Christ, therefore, builds his church, not just on Peter, and not just on his confession of faith. Both are true. It is more than that. He builds his church on this new, divine/human relationship of which Peter (and by implication his successors) is the foundation and the mouthpiece.
The Catechism teaches that it is Christ who is infallible, and he grants a measure of his infallibility to his body the Church. This infallibility is simply the assurance that what the Catholic Church teaches in the matter of faith and morals is without error. This infallibility is a gift to the whole Church, and it is exercised through the ministry of the apostles who were specifically commissioned by Christ to teach and preach the truth. From the earliest time that ministry was considered to be passed on to their successors by the laying on of hands, and the apostolic ministry continues in the lives and ministries of the Catholic bishops today.
This infallibility is expressed not just in ‘ex cathedra’ statements by popes, but by the whole ordinary magisterium of the church. There is a kind of ‘assumed infallibility’ that is to say, that whatever the church teaches is without error. However, there is a hierarchy of truth and particular dogmas and moral teachings of the church carry more weight than other lesser teachings, disciplines and opinions of the hierarchy.
The Pope’s role in all of this is that he is the focus and head of the church’s ministry in every way, and therefore he is also the focus of the church’s gift of infallibility. In harmony with the rest of the whole church, he may pronounce and teach with the gift of infallibility. He may, at times, exercise this gift when the teaching is consonant with Scripture and tradition even when many in the church disagree with his position.
Thus the gift of infallibility, which enjoys the traits I have outlined, is exercised in the Catholic Church. Some have asked me to comment on how these traits are lacking in other traditions. I don’t think this is my task. I wish to explain and expound on the Catholic Church’s teachings.
If the other Christian traditions are lacking in these traits of authority, I leave the reader to think it through and draw his own conclusions.
PatheosDwight2009-07-08T11:20:00-04:00July 8th, 2009|Categories: Patheos|0 Comments